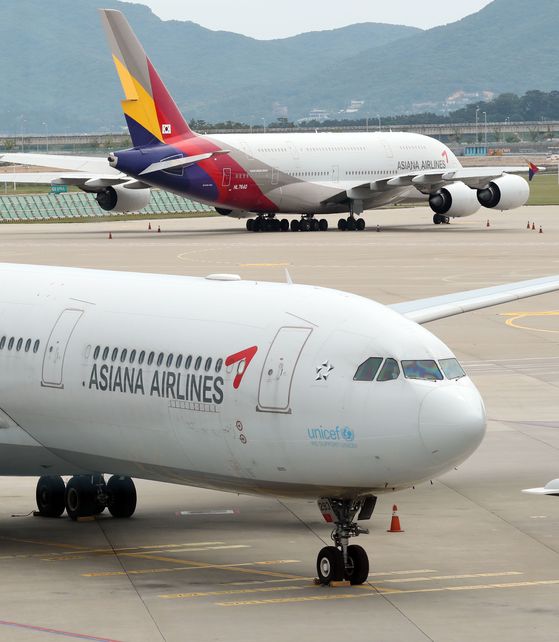 Asiana Airlines on Thursday roundly rejected claims that it did not disclose sufficient information to the company scheduled to acquire it at the end of the month and did not inform the buyer of plans to pile on debt between the signing of the deal and the closing of it.


“We have been faithfully and transparently providing the information required by Hyundai Development Company (HDC)'s management,” Asiana Airlines wrote in a statement Thursday, adding that HDC has had its employees on site conducting due diligence for the deal since January.

In December, HDC and Mirae Asset Daewoo agreed to buy the 30.77 percent of the airline owned by Kumho Industrial and newly issued shares. As the carrier's business collapsed, Korea Development Bank (KDB) and Export-Import Bank of Korea announced they would extend 1.7 trillion won ($1.4 billion) in loans to the carrier in April. The airline has added a total of 4.5 trillion won in debt since HDC agreed to the acquisition.

“Asiana has been faithfully providing sufficient data and went through negotiations and gained approval in regards to the issues on the change of the financial situation, borrowing additional funds and issuing perpetual convertible bonds that were mentioned by HDC in a press release Tuesday,” the airline added.

In a statement Tuesday, HDC claimed that the airline failed to provide it with the information it needed and said that Asiana made material decisions without consulting with the acquiring party, like increasing debt dramatically as travel all but stopped during the pandemic.

HDC wrote in the statement that it "couldn't receive a sufficient amount of credible information.”

Since early this week, HDC, Asiana and KDB have been battling via press release as the deal seems on the verge of collapse. On Tuesday, HDC said it wanted to renegotiate the terms of the deal and mentioned that Asiana has not been transparent. On Wednesday, KDB shot back that HDC needs to be more specific about what it would like change in the agreement. The following day, Asiana sought to rebut the accusation that it has not been transparent.