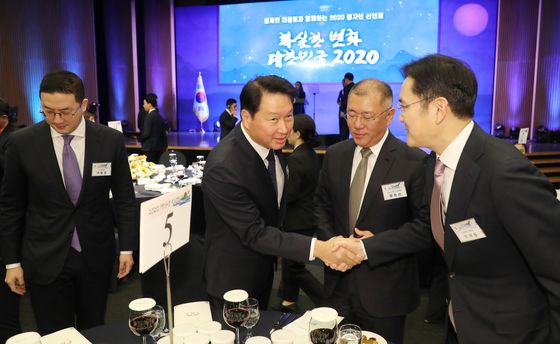 
Chaebol are in a rush to raise cash, with the goal of securing ammunition for possible merger and acquisition deals. or simply gearing up for economic uncertainties from the coronavirus pandemic.


"Companies are seeing the need to secure cash due to growing financial uncertainties," said Hwang Seiwoon, a research fellow at the Capital Market Institute. "Cash is crucial."

While many companies are struggling to survive, some of the larger groups are building their war chests and rainy day funds, selling assets and shares, issuing bonds and shutting money-losing businesses.

“Mobilize as many cashable assets as possible,” SK Group Chairman Chey Tae-won recently told the group’s leadership. The plan is to acquire as many profitable companies that may become available as a result of the crisis.

One executive from the group told JoongAng Ilbo that he's seeing a “heated competition” among group companies to secure as much cash as possible.

SK Group’s effort to increase cash dates back to February, when the coronavirus pandemic was in the early stages around the world. The cash reserves of SK Holdings doubled during that time, an increase of 5 trillion won ($4.2 billion).

Others are dumping stakes they own in other companies. SK E&S in April sold off the 10.25 percent it owns in Hong Kong-listed China Gas Holdings, securing a total of 1.8 trillion won. SKC, a chemical and materials company, plans to sell its shares of SK Bioland to the Hyundai Department Store Group. 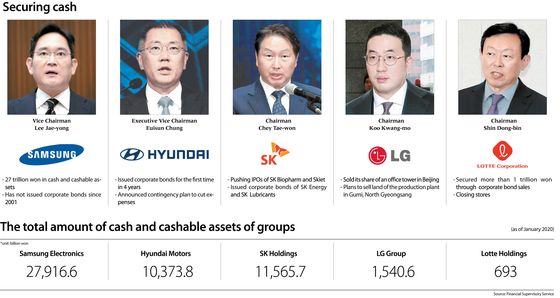 According to quarterly reports, Lotte Corporation and Lotte Shopping have 693 billion won and 1,014 billion won, respectively, in cash and cashable assets. Among top five conglomerates, Lotte is still behind in terms of its cash hoard.

Lotte Group can also raise money in Japan, where it has significant holdings and where Shin Doing-bin, the group's leader, stayed recently for a number of months. Lotte Shopping is closing 200 department stores and large supermarkets, which could help the money-losing company generate better cash flow.

LG Group is busy liquidating its real estate assets. LG Electronics in February agreed to sell its stake in LG Beijing Twin Towers in China to the Government Investment Corporation in Singapore. The sale price was set at around 668 billion won.

LG Display is preparing to put up for sale a plot of land in Gumi, North Gyeongsang, where three out of six of its production lines are currently closed. LG Chem recently inked a deal with the Ningbo Shanshan, to sell most of its liquid crystal display (LCD) polarizer business for $1.1 billion.

Hyundai Motor and Kia Motors each issued about 300 billion won of corporate bonds in April, to secure liquidity and invest in research and development. For Hyundai, this is the first time in the past four years for the company to issue bonds.

Samsung Group is the exception, as it is sitting on a 27-trillion-won pile of cash. It did not issue bonds, liquidate assets or make any major sales recently.