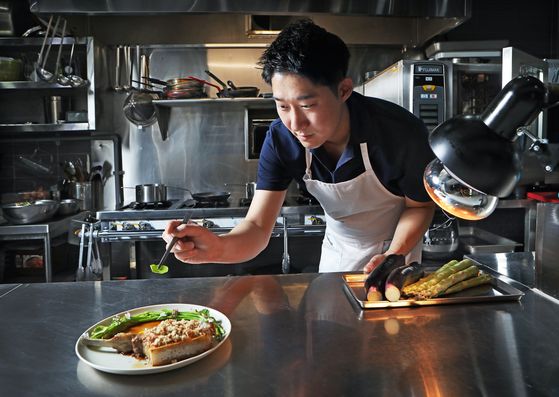 Chef Kim Jeong-ho of Sanok plates a dish in his kitchen. [PARK SANG-MOON]

He was one of the original chefs at now Michelin-two-starred Jungsik in Seoul, which opened in 2009, and stayed there for 10 years where he worked his way up to the position of head chef.

This feat is particularly rare in Korea as its almost unheard of to stay at the same restaurant for such a long period considering the restaurant scene is still relatively young.

It wouldn’t be an exaggeration to say that the scene started to form around the same time Jungsik, headed by chef Yim Jung-sik, opened, alongside other fine-dining style spots then locally referred to as “boutique” restaurants. 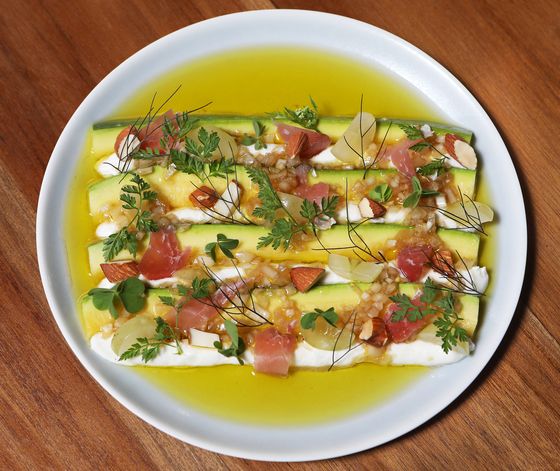 A plate of zucchini with burrata cheese at Sanok. [PARK SANG-MOON]


Kim, who has seen the scene grow and evolve over the past decade under the roof of Jungsik, which now has restaurants in both Seoul and New York as well as a cafe in Seoul, decided it was time to make his name known and last year opened his own restaurant in the hopes of making his mark.

“I never planned to spend 10 years at one place and go independent,” said the chef, who was not only cooking in the kitchen but also managing the overall running of the restaurant.

“Owning a restaurant and cooking the style of food you want is almost every chef’s dream, and I have that yearning as well even though I was given a lot of opportunities to show my own take on dishes.”

One goal he had when opening his own restaurant was to source ingredients that were not so readily available.

At multi-story Jungsik, only ingredients that could be found in a stable supply could be used but at the smaller Sanok, using rare and experimental vegetables grown by small size farms was much more feasible. 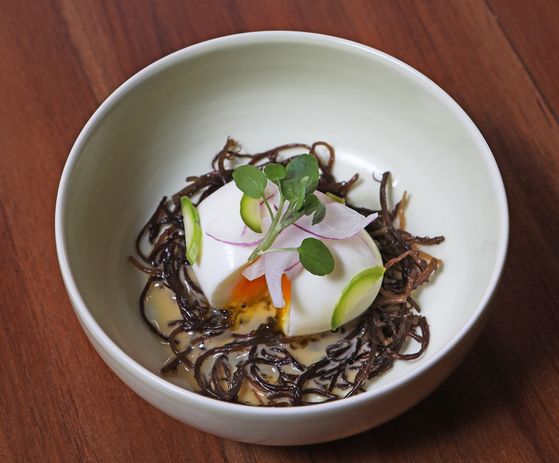 
Kim's desire to incorporate a variety of greens in his restaurant are even reflected in its name. Sanok in Korean means four greens.

Using seasonal foods also gives Kim the freedom to change up the menu. He aspires for his menu to become even more reliant on whatever is in season and closely communicates with farmers to achieve this.

He evens travels to his suppliers farm's himself to harvest herbs that he wants to add to or base his dishes on.

“I want to show diversity in a dish,” said the chef.

“It is so exciting to just harvest fresh herbs and bring them on the dish for customers so that they can know how diverse products are in Korea.”

The biggest difference between the dishes he served at Jungsik and the ones he serves now is how casual they are. Sanok only offers food a la carte; there are no set menus and is only open for dinner.

A similarity between both restaurants is that they strive to create Korean food with a Western twist so that a range of customers will feel comfortable eating it.

Sanok's duck and noodle dish is the perfect example of this goal for fusion. The inspiration came from a bowl of duck soup spiced with perilla seeds that is elevated to a more sophisticated version which is recognizable to Korean diners but also appealing to international customers. 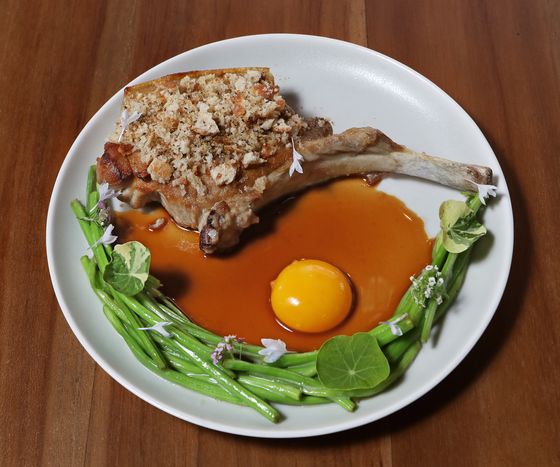 A dish of lamb at Sanok.[PARK SANG-MOON]


His version of the soup becomes more like a stew, with the broth boiled down to make a thicker more flavorful sauce.

“I think a lot about using the sauces for certain dishes for something else that hasn't be done before,” said the chef.
“The sweet and spicy tteobokki sauce can be used to highlight something other than tteok (sticky rice cake).”

Kim dreams of taking his love for greens outside of Seoul in the future.

Blue Hill at Stone Barns, a restaurant located beside a farm, in New York is the model he cherishes the most right now as he also wants to build a place where people have enough space to walk, explore and enjoy before enjoying a meal.

He learned more about the particular restaurant after Kim took on the role of head chef for about two years to establish Jungsik’s New York branch in 2012. He came back after it was awarded with two Michelin stars.

“Although running my own restaurant is at a whole new level, even with the management experiences I had at Jungsik which I thought would give me some level of confidence, I’m trying to enjoy every moment.”

Lots of owner chefs he had asked for advice from told him that remaining true to his style despite financial hardships was the key to success.

“I am growing as a chef just as diners in Korea are becoming more worldly,” said Kim, adding that he wants to communicate more with his customers. “This is just the beginning, and I am curious about what picture I will continue to paint.”