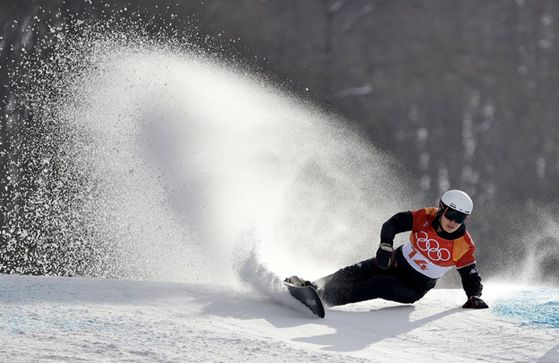 Alpine snowboarder Lee Sang-ho races down the slope during the men's giant parallel slalom race at the 2018 PyeongChang Olympics in Gangwon. [YONHAP]

Over the next few months, the Korea JoongAng Daily will meet with athletes from across the sporting world to discuss how they got their starts and earned their fame as well as their lives on and off the field.
This week’s interview is with alpine snowboarder Lee Sang-ho.


Alpine snowboarder Lee Sang-ho might not be one of Korea's most well-known athletes, but his career is going strong.

Lee hasn't always been snowboarding in obscurity — back at the 2018 PyeongChang Olympics he won Korea's first-ever Olympic medal in a snow event. A year earlier, at the 2017 Sapporo Asian Winter Games, Lee first started to put snowboarding on the Korean sporting map.

Lee picked up two gold medals at the Sapporo Games, in the parallel slalom and the parallel giant slalom. Although the Asian Winter Games don't get anywhere near as much coverage as the Olympics, Lee's gold medals made headlines in Korea as he was the first-ever Korean to win gold on a snowboard. Lee also benefited from timing — his first gold was Korea’s first medal of the tournament, so he was guaranteed plenty of coverage.

Following the Asian Games, Lee continued a strong season leading up to the PyeongChang Olympics. He picked up a silver at the International Ski Federation (FIS) World Cup in Kayseri, Turkey. After a consistently strong 2017 season, Lee climbed up the FIS World Cup ranking to fifth in parallel giant slalom.

Despite his success, in the build up to PyeongChang Lee was overshadowed by the success of fan-favorite Yun Sung-bin in the skeleton. As a result, when Lee won silver at the Olympics, it was as if he'd come out of nowhere.

Much like Yun's skeleton success, Lee made history at PyeongChang, not just for Korea but for the whole of Asia. To date, he is the only Asian ever to have won a medal in an Olympic alpine snowboarding event. 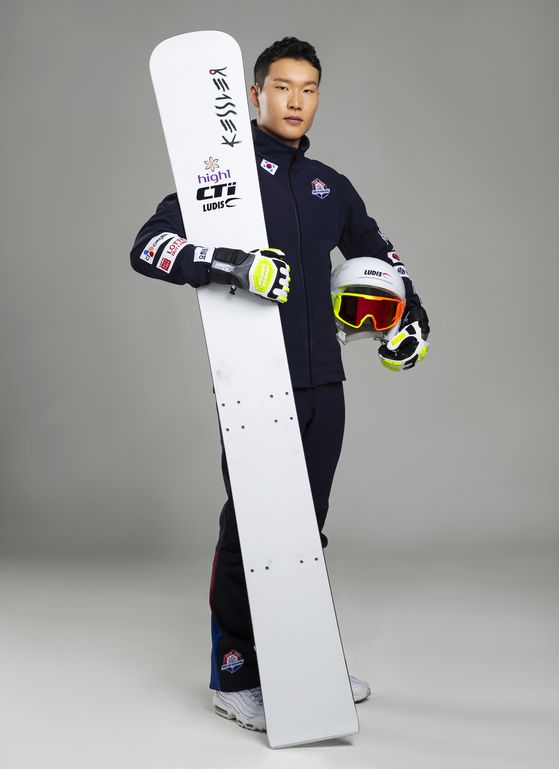 When the Winter Games finished, the slope where the men’s parallel giant slalom race was held was renamed the “Lee Sang-ho slope.”

But despite his eponymous ski slope, Lee might actually be better known by the nickname "cabbage boy." Lee started snowboarding on a slope near his home in Gangwon that was also used to grow cabbages. The nickname took off, and Lee's fans often give bouquets of cabbages in lieu of the more traditional flowers.

Lee's success is all the more remarkable considering how unfamiliar competitive alpine skiing is to most Koreans.

It started with a sled


Lee first encountered snowboards when he was in first grade in elementary school, when he was heading out to go sledding.

“I saw people snowboard when I went sledding,” Lee says.


His memories of the time are vague, but Lee remembers feeling curious as he watched people standing up as they hurtled down the slopes.

“When I watched people snowboard, it looked really fun,” Lee says. “So I nagged my dad that I wanted to do it too. I remember that part.”

Lee grew up in mountainous Gangwon, Korea's snow sport heartland, so it wasn't long before Lee's father let him hit the slopes.

“At the time, the speed was thrilling and I just had fun snowboarding,” Lee says. “I started with freestyle [snowboard]. So I jumped.”

Although in the early days young Lee was attracted to the excitement of jumps and tricks, his real love was always the snowboarding itself.

By the third grade, things started to get serious.


“In the third grade in elementary school, the coach who was teaching at the slope told me to compete in an event being held by the federation,” Lee says. “I competed and received an award. I think I either finished second or third.”

Following the unexpected podium finish, Lee started to take the sport more seriously. At this stage he was still competing in freestyle events, but in fifth grade of elementary school he switched over to alpine. His body made the decision for him.

“When I was in about fifth grade in elementary school, I completely switched to alpine,” Lee says. “Since I was a lot bigger than freestyle snowboarders, coaches suggested that I physically may be better suited for alpine, that my body is specialized for that. That’s why I switched over.”

Snowboarding might be Lee's job now, but he's never lost sight of that childish enjoyment.

“When I snowboard, I’m happy. Being able to snowboard is just fun,” Lee says.

The difference between the men’s parallel and parallel giant slaloms is the distance between each gate. Giant slalom is competed over a longer course, putting the focus more on speed and endurance than the regular slalom, where competitors pinball from gate to gate.

Both have the same format: head-to-head. The snowboarder who finishes fastest wins.

“The gates are set further apart in giant slalom so it has more speed,” Lee says. “But in slalom, the distance between the gates is shorter so my movements are faster and more rhythmical.”

Lee prefers parallel giant slalom, as he enjoys the thrill of speed.

When he stands on the starting line, Lee says that he has a lot of thoughts going through his head. Rather than the positives, he runs through every possible negative scenario.

“When I pull the start bar, then the door opens and the race starts,” Lee says. “The door opens according to the signal but I think about what would happen if I pull the bar earlier [than the signal]. If I do, I could fall or lose my balance. I also think about the possible mistakes I could make on the slopes where the gates are set in difficult positions, and millions of other thoughts. I’m not scared, but am very negative.”

Perhaps getting the negative thoughts out the way early is a good idea — when the race actually starts, Lee typically races from the start through every gate down to the finish line in about 40 seconds.

“There so many thoughts going through my head before the start, but when it begins I can only think about one thing,” Lee says. “Since it’s the parallel giant slalom, I have to eliminate my opponent by finishing [my race] before him. Because we’re racing together, I can feel the tension against the other racer. Even if I’m leading, until I cross the finish line ahead of him and find out that I’ve won for sure, I feel like I’m being chased.”

Snowboarding is also a mental game, and whether Lee is in the lead or not, there's never time to focus on anything except his opponent.

“There’s no time to be relaxed,” Lee says. “[The race is] 40 seconds at the longest. When you think about it, that really isn’t anything. A little mistake can lead me to fall behind by half a gate or a full gate. Since there’s this thought that I’m going to lose if I make a little mistake, I feel nervous. So whether I’m being chased or chasing, there’s no time to feel comfortable, psychologically.”


It’s been two years since Lee's historic achievement at the Olympics, and the past two seasons haven't been the best statistically. But when Lee looks at himself right now, he's proud of where he is.


“The first season after the Olympics, I made changes to my equipment since it was the perfect time to try something new in preparation for the [2022] Beijing Olympics,” Lee says. “This led to me playing worse than the season right before the Olympics. It was a good attempt and a great snowboard, but I came to the conclusion that it wasn’t the right one for me.”

Lee switched back to his old board and found himself in a much better position. However, in the 2019-20 season, he had to drop out in January due to a shoulder injury.

Lee wasn't having a bad season before then. He won a silver at an FIS World Cup race in men’s parallel giant slalom in Corina d'Ampezzo, Italy, in December and was slowly climbing back up the ranks before he had to pull out. Among other events, Lee missed out on the World Cup races on his eponymous Pyeongchang slope in February.

But ever the optimist, Lee considers it all good experience.


“The surgery was successful, and it has been treated well, without any pain,” Lee says. “So I can exercise now. I’m just complimenting myself, but I’m only talking about the good things.”

“Among the ski and snowboarding team, I was the only one who didn’t fulfill his military duty,” Lee says. “Everyone on the team was either serving their time or had already completed it. The older teammates made fun of me and gave me pressure.”

Although he was just as happy at the Olympics, Lee says that he didn’t have time to process everything at the Games.

“I was only 23 years old," Lee says. "But in our event, the peak of our career is in our late-20s to early 30s. Since the Olympics was being held in Korea and I knew this isn’t going to be an opportunity that I’ll get to experience again, I worked really hard with a goal of winning in PyeongChang.”

Snowboarding in the shadows

While snowboarding has become a popular winter activity in Korea, when it comes to professional alpine snowboarding, not many Korean fans watch the events.

“In terms of elite sports, it’s definitely an unpopular event,” Lee says. “But publicly, it’s a popular sport. Every winter, everyone wants to try snowboarding, and when looking at teenagers and people in their 20s, a lot more people prefer snowboarding than skiing. Since I think the perspective toward the sport is becoming more positive, I don’t think I feel [stressed about the sport being] not popular.”

Competitive snowboarding might be becoming more popular, but Lee often goes unrecognized, even on his own ski slope.

“We were going up the slope together and I heard someone say, 'Let’s go to the Lee Sang-ho slope,’” Lee says. “Then the other person said that slope is really hard. I hear that sometimes. When I hear people say let’s go to a different slope because the Lee Sang-ho slope is really hard, then I feel like they’re talking about me when they’re not. So sometimes, I tell them to try it out.”


Going forward, Lee has one goal — winning gold at the Olympics. As he’s already made history with his Olympic silver, he’s hoping to go one better in Beijing.

"At the Olympics in Beijing, I want to win gold," Lee says. "As for my long-term goal, I just want to work hard until the time I retire as a professional snowboarder. And after that, I want to become a member of the IOC [International Olympic Committee] or a professor. I want to be a role model and help young snowboarders."