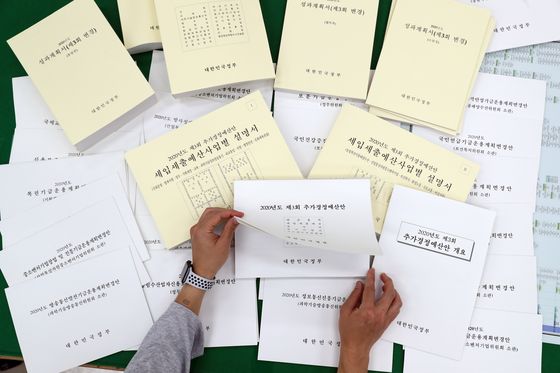 
The 2021 government budget is set to be another record breaker, with the administration's opening gambit coming in at over 540 trillion won ($447 billion).

As was the case over the past four years, heavy increases in health, welfare and job spending have been requested.

The big number, which was put on the table just after a request for a third supplementary budget, adds to ongoing concerns about the fiscal deficits and rising debt.

On Friday, the Finance Ministry proposed a 542.9 trillion won budget for next year, which is a 6 percent increase compared to this year’s.

The budget proposal will be submitted to the National Assembly in September.

Although the rise is slower than this year's increase, it would be the fourth year in which the budget is up over 6 percent.

A full one-third of the request is for spending on health, welfare and jobs. The government is looking for 198 trillion won for this category, up 9.7 percent from last year and an all-time record.

Under the Moon administration, which championed welfare and job spending, the relevant budget figures have been increasing by double digit percentages annually.

Also notable is the industry, small- and medium-sized enterprises and energy budget, where the increase is the sharpest. The government is asking for 26.6 trillion won for this category, which is a 12.2 percent increase compared to this year's.

The government said much of the budget is to be used for the so-called Korean New Deal, which the government is pushing for the creation of jobs in national digital projects.

The budget for R&D was expanded 9.4 percent to 26.5 trillion won, which not only include the development of the key materials that are under strict export control by Japan, but also on so-called D.N.A (data, network and artificial intelligence) technologies and the so-called Big 3 (future cars, system semiconductor and biologics and health).

The government also requested a 7.1 percent increase to 9.7 trillion won for the realizing its Green New Deal.

Only education was cut. That budget was reduced 3.2 percent when compared to this year’s to 70.3 trillion won. The ministry said the cut in the education budget is largely the result of a reduction in the superintendent of education budget. The superintendent budget by law is determined by the expected tax take. As the government expects taxes to shrink next year, the budget has been cut.

When excluding this portion, the ministry said, the education budget remains almost unchanged.

The main problem is the growing debt.

Of the 60 trillion won, 34.5 trillion won is funded through government bonds, which is debt.

As a result, overall national debt is 840.2 trillion won, up 15 percent from last year. This puts the nation’s debt-to-GDP ratio at 43.5 percent, 6.4 percentage points higher than last year’s 37.1 percent.