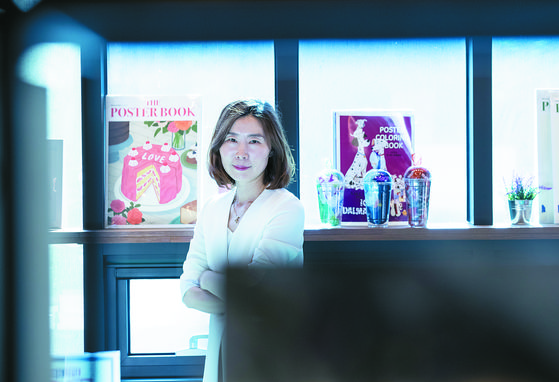 Jung, who makes regular TV appearances and is known as the "Organizing Queen" and “clutter expert,” is now recognized as Korea's answer to Marie Kondo, working with high-profile celebrities like girl group Mamamoo's Hwasa and TV personality Park Myung-soo. Jung has 110,000 Instagram followers and her YouTube channel “Jung Hee-sook’s Smart Organizing” has 100,000 subscribers.

The JoongAng Ilbo sat down with Jung to discuss her success, both as Korea's No. 1 clutter expert and as the CEO of a unique and highly successful business. Following are edited excerpts of the interview.

What do you mean when you say you learned about death while doing this job?


I talk to my clients for a long time before I organize their homes. When I ask why they want to sort out their house, the reason is often because a family member has passed away. One client once said, "My husband never came back after leaving for work because of a car accident." Another said, "My wife left suddenly, and I can't imagine throwing away her stuff.” I also once had to clean a whole house after the entire family died. I've come to realize that organizing is what we do when we are alive, not when we are dead.


Is there a particular house that was unforgettable?

There was somebody once who had so much clutter in their house that they were forced to move in with their parents. Things were piled up everywhere, including on the bed — there were eight fans, three air fryers, boxes of instant rice and instant noodles, toys and toilet paper.


How do you organize such messy houses?

The priority is to see if the client is ready to clean up and move on. So the first thing I always ask is why they want to organize the house.


What do they usually say?

They say they want to change, they don't want to live like this. Tragic events like divorce, the death of a child and fights against cancer are often reasons. Some say they want an organized house that fits their social position.

I listen to these stories for a couple of hours and many clients cry while talking about conflict, depression and obsessive-compulsive disorder. After cleaning up 2,000 different houses, I realized how people live and what makes them happy or sad.


Why would you listen to their stories for such a long time?

The way I reorganize the house depends on factors like how old the child is, whether the household is single-income or whether the house is under a jeonse (long-term lease) contract or a monthly rent. I need to know why they are trying to clean up to provide the best service.


How long does it take to organize a house on average?


Since you have been working in this field for 8 years, have you noticed any changes to houses in Korea?

People seem to buy a lot from home shopping channels. They all have the same items. When black soybean is popular, everybody has black soybeans. Not just that, but also sheet masks, clothes — you name it. The more you are unhappy, the more you shop.


Japanese organizing consultant Marie Kondo's method of "If it doesn’t excite you, throw it away" is also famous. What do you think of her method?

I don't aim for such a minimal life. In a family-oriented society like Korea, we cannot just throw everything away. It's best not to bring anything into the house. People collect too much clutter like bits of string, shopping bags and rubber bands. Koreans are the worst at throwing things away. You have to make use of what you already have and buy less.


Could you tell us about your recent book?

There is no special method to organizing, but it involves taking everything out, sorting it and putting it back again. But don't do it all at once. Start with your jeans today, then maybe try bowls tomorrow.


How did you start this job?

After graduating from high school, I worked at a hanbok (Korean traditional clothing) store, as an office accountant and as a fashion store manager in a department store. After getting married at age 35, I lost focus of my own happiness for a while as I was only focused on my family's happiness. Then, at age 40, I decided to look for work for myself again. People recommended this career path when they say how much I clean and organize my own house.

What does home tell you about a family?

When I go to someone else's house to clean up, I see the happiness of the family. Some parents are obsessed with their children and always want to sleep with their grown children. Once the child's room is properly built, children learn how to be independent. Couples’ relationships seem to struggle if there is no private space for the husband.

The more troubled the mind is, the messier the house is. That's why we can't see housekeeping as just a money-making job. I only accept about 30 percent of organizing requests. People tell me to build a franchise and grow a business, but I can't.