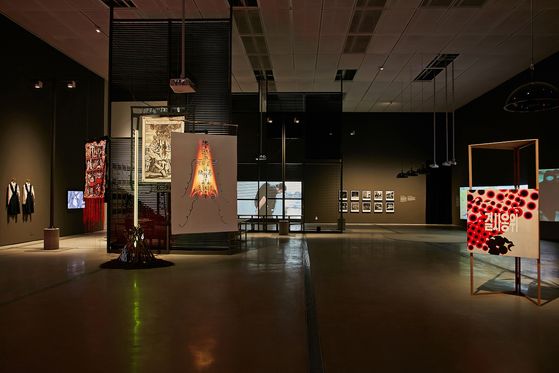 A one-word or one-sentence definition may be difficult, but audiences at the Museum of Modern and Contemporary Art (MMCA) Seoul’s exhibition “Looking for Another Family” can start their journey to answering that question by thinking about how Asia treats minorities.

“Looking for Another Family” is a part of the “MMCA Asia Project” series that began in 2017 and presented its first exhibition, “How Little You Know About Me” from April to July 2018, that aimed to “propose Asia as more than a geological identity and as a new and critical perspective on the world” according to the museum. The artists could not visit Korea due to the coronavirus, and the installation was done via video and phone calls.

If the previous exhibition had been about looking at the Asian way of thought in perceiving the world, the “Family” exhibition takes the audience a step outside of Asia.

Though the word family acts as only a metaphor for society and community — no family-related issues are actually mentioned — the exhibition does provide a chance for people to thoroughly think about what makes Asia Asia, especially regarding its attitude toward minorities. It also expresses people’s wish to “find a new family outside of the blood-bound meaning of family,” according to curator Park Ju-won.

“Featured in this exhibition are 15 teams of artists from eight Asian countries — Korea, China, Hong Kong, Taiwan, Japan, Indonesia, Malaysia and the Philippines — who depart from contemplation on their own identities to explore wider realms of consciousness: their own communities, societies, countries, and eventually, the world,” she said.

“The artists also offer opportunities for viewers to involve themselves in active communication not only through artworks comprising performances, photographs and videos, but also through workshops in the forms of a snack cart, farming, an investment booth, a music video screening, a newsroom and a round table discussion.” 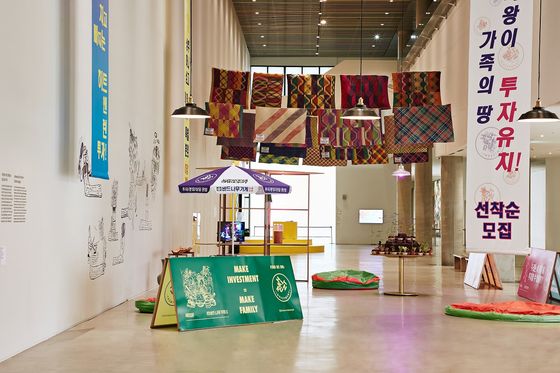 
Taking center stage in the exhibition’s theme is the idea of sexual minorities and Asia’s notorious exclusion of those people from the society — how they are mistreated, coerced, oppressed and silenced in the pretense of economic development and social unity. The history of such inequality can be found at Korean artist Lee Kang-seung’s bookstore-style installation titled “Imaginaries of the Future,” which offers a well-curated documentation on the past, present and future of the LGBTQ community in Korea.

Dew Kim, also Korean, takes a more personal approach and talks about what it means to be queer in Korea through a K-pop style video, while an Indonesian artist sheds light on the people who are forced to live the lifestyle of a certain gender and the conflict between one’s gender and the gender role forced upon them by the society through his photograph series.

Outside of the exhibit hall in the communal space of the museum, a more audience-participatory display awaits guests. “Turo-Turo,” organized by 98B COLLABoratory, HUB Make Lab and Kantina, allows people to share their ideas on alliance and solidarity while sharing food provided at the bar, and “On the Way to Investment” put together by Jatiwangi Art Factory and Budnamugage allows people to think about the capitalistic view on land and nature while having a go at actually investing in real estate. 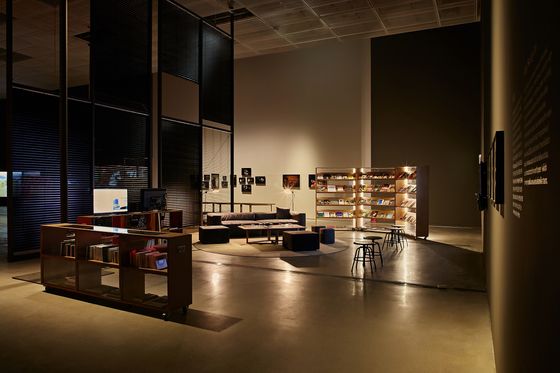 
“It’s hard to criticize a certain problem, but it’s harder to come up with a solution for that problem,” said curator Park. “We have come to realize that we have been repeating the wrongdoings from the past. It may be hard, but we need to discuss the problems to find a way. This exhibition is meant to raise questions about the ongoing situations and provide a sphere of communication.”

The exhibition was originally set to open on May 22, but had to delay due to the sudden outbreak of coronavirus clusters around the Seoul region. The MMCA and other state-run art facilities shut for two weeks from late May, which was originally meant to end on June 14 and reopen on Monday. The shutdown will "continue until the situation subsides" according to the Ministry of Culture, Sports and Tourism. MMCA will take reservations online and only allow a certain number of guests for each time slot when it reopens. The exhibition runs until Aug. 23.