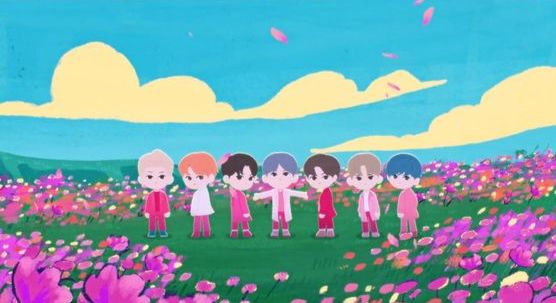 The animated music video for "We are Bulletproof: the Eternal" [BIG HIT ENTERTAINMENT]

BTS released an animated music video for its song "We are Bulletproof: the Eternal" on Friday as the 11th piece of content for its "BTS Festa" project.

The animated music video for "We are Bulletproof: the Eternal" [BIG HIT ENTERTAINMENT]

The two prior "Bulletproof" songs were powerful hip-hop tracks, but "Eternity" added a stadium anthem EDM style to the song, according to the agency, that amplifies "BTS's wish to become one with the audience."

"The music video was made as part of the concept of 'BTS's chronology,' to look back on the seven years since its debut," the agency said.

In fact, the lyrics take parts from "We are Bulletproof Pt. 2" and express how the band became stronger after enduring seven years of challenges.

The background animation of the music video is also a homage to the band's past, which takes scenes from previous music videos such as "I Need U" (2015), "Run" (2015) and "Boy With Luv" (2019) so fans feel like they are "looking through an illustration book and can find the hidden symbols within the scenes."

BTS began its "Festa" on June 1 to celebrate the seventh anniversary of its debut that falls on Saturday, June 13.

The highlight of the "Festa" will be unveiled on Saturday.

BTS We are Bulletproof the Eternity Festa

CL to perform at music festivals in Japan and U.S.