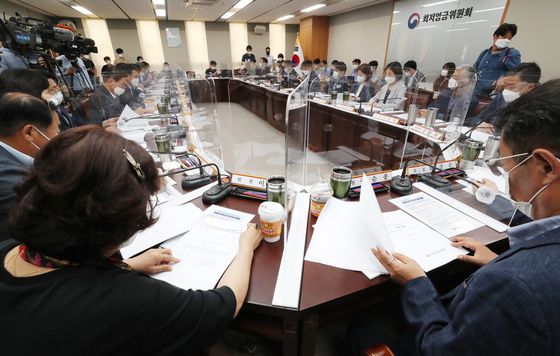 Participants attend a meeting of the Minimum Wage Commission in the administrative office in Sejong Thursday to decide next year's minimum wage. [YONHAP]


With two weeks left until next year’s minimum wage is finalized, 8 out of 10 academics say that the government should either freeze or lower the base pay, according to the results of a survey by the Korea Economic Research Institute Sunday.

The institute conducted a survey to 110 business and economic professors teaching at universities in Seoul and the metropolitan area from May 11 to 29. An overwhelming majority, 82.7 percent, responded that the government should freeze or lower next year’s minimum wage.

Korea’s minimum wage is updated on an annual basis, and currently stands at 8,590 won ($7.22) per hour. The negotiations for next year’s minimum wage began Thursday, with the first plenary meeting at the administrative city of Sejong, comprising 27 attendees representing the public interests, workers and employers.

“The Environment and Labor Committee in the 21st National Assembly need to support labor policies that can help companies adapt to a rapidly changing economy, by easing labor regulations and expanding flexible working hours," said Choo Kwang-ho, the institute's director of research coordination.

More than half of the respondents said the government should shift its policy direction toward job creation and away from employment stability. And 32.4 percent answered that the government should grow its capacity to create jobs in the private sector, followed by 28.2 percent of respondents who emphasized improving flexibility in the labor market.

When asked why, respondents pointed out the “wage system based on performance and job types” as a factor that kept the U.S. labor market competitive. For Japan, respondents noted the “acceptance to different types of labor contracts” as a strength for the Japanese labor market. The survey results also mentioned China’s “relatively easy layoffs and flexible hiring practices,” that could give the Chinese market a competitive edge over Korea.

More than 70 percent of respondents agreed that Korea should apply flexible working hours, a performance-based wage system and different minimum wages based on region and job type.

The respondents also advised lawmakers on the Environment and Labor Committee to value “consistency and predictability” when carrying out labor policies. Others suggested areas of improvement included more communication between laborers and employers, laws and regulations that meet global standards and realistic and applicable labor policies.

“Not only do companies need to overcome external uncertainties from the coronavirus pandemic, but they also have to prepare for the post-Covid-19 era, in which digitization and automation will become the norm,” Choo said.