New class of IT conglomerates are changing the face of Korea Inc.

New class of IT conglomerates are changing the face of Korea Inc.

The manufacturing giants that used to sustain the country’s economy have now largely been replaced by IT behemoths.

Kakao which started as a messenger app, recorded the biggest hike in terms of assets, sales and number of employees among Korean conglomerates based on Fair Trade Commissions (FTC) data between 2016 and now.

Compared to 2018, four of the 10 conglomerates that have recorded the highest increase in assets were internet companies.

To be classified as a conglomerate in Korea a corporation has to have more than 5 trillion won ($4.16 billion) in assets, evaluated by summing up the assets of the company's non-financial affiliates and the capital of financial affiliates. 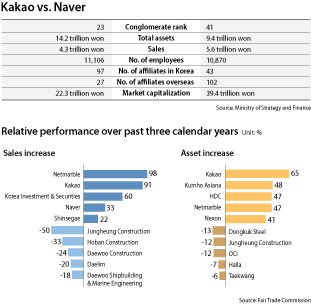 When the JoongAng Ilbo, an affiliate of the Korea JoongAng Daily, evaluated the FTC data, Kakao topped the list of 64 registered conglomerates in Korea in terms of increase in assets compared to 2018. Kakao’s total assets rose by 65 percent over the cited period.

Netmarble, Nexon and Naver, all of which are internet-dedicated companies, followed Kakao in expanding their assets over the same period.

During the same period, however, conglomerates that are associated with more traditional industries, like Dongkuk Steel and Jungheung Construction, experienced a drop in their assets by 13 percent and 12 percent, respectively.

The discrepancy was even more apparent in terms of sales.

Game developer Netmarble and Kakao topped the list in terms of increase in sales over the past three years. Netmarble’s sales rose by 98 percent, while Kakao rose by 90 percent.

Netmarble was registered as a conglomerate in 2018 and acquired local water purifier rental company Coway in the latter part of last year.

Korea Investment & Securities followed the list with a 60 percent increase and Naver with a 33 percent in sales over the same period.

“When looking at Sweden, which has a similar industry structure to us, the vacancy caused by the demolition of auto and shipbuilding industries is now filled by IT companies. Domestic conglomerates are going through a generation transition as well.”


No movement at the top

Looking at the top 10 conglomerates, not much has changed compared to 2016 in terms of asset size. GS and Hanwha Groups, which were in the seventh and eighth spots in 2016, have now swapped positions.

SK saw its asset expand by the most over the past five years among the top 10 conglomerates. Its assets rose from 160.8 trillion won to 225.5 trillion won, a 40 percent increase.

Hanwha, LG and Samsung followed with 31 percent, 29 percent and 22 percent increases in assets respectfully over the cited period.

Posco barely saw any change in its assets compared to five years ago, going from 80.2 trillion won to 80.3 trillion won. Lotte saw its assets rise by 18 percent, but sales dropped by 4 percent and number of employees fell by 7 percent as well, implying that internally, the group was not doing as well as it seems.

Kakao was registered as a conglomerate by the FTC in 2016 as its asset surpassed 5 trillion won. Afterwards, Kakao actively pursued mergers and acquisitions and setup new subsidiaries to expand the company’s size.

As a result, the number of Kakao affiliates rose to 97 this year, compared to 45 in 2016 according to FTC data. This means that it has the second highest number of affiliates in Korea after SK which as 125 affiliates.

In terms of asset size, Kakao ranked at No. 23 this year, jumping up from 65 spot in 2016. Its market capitalization more than tripled.

Naver’s expansion is also noticeable. It ranks fourth in terms of market capitalization on the country’s main bourse, at 39.5 trillion won as of June 8.

When looking at the figures, it seems that Naver’s growth is slower than Kakao. But the story is a little different when you delve a little deeper.

Naver has 43 affiliates based in Korea, but it actually has an additional 102 affiliates overseas with Japan-based Line at the center. The number of employees, therefore when including its global subsidiaries, is 15,200, exceeding that of Kakao.

Naver is focusing more on overseas markets. With Line, a messenger app that is especially popular in Japan and Southeast Asian countries, Naver is quickly advancing into local taxi, delivery and finance businesses. Recently, Naver designated its Los Angeles-based Webtoon Entertainment, a Naver subsidiary, as the head office for the IT company’s digital comics segment.

Kakao’s overseas affiliates amounts to 27, on the other hand, only one third of that of Naver.

“Naver has settled down in Japan with the success of Line,” said Jeon. “It is expanding its business to Southeast Asian countries, the United States and France. Kakao, on the other hand, is successful in Korea, but doesn’t have a noticeable presence overseas.”

The number of users for Kakao’s flagship KakaoTalk messenger app recorded 51.7 million as of January, 45.1 million of which are based in Korea.