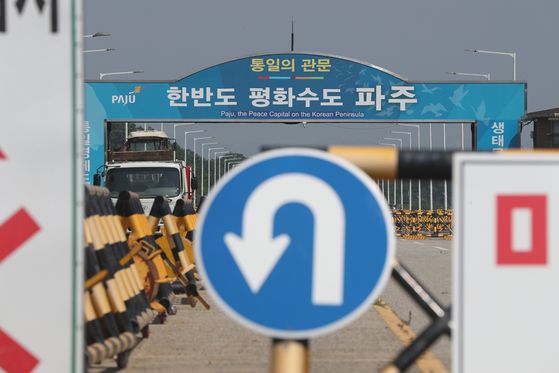 A U-turn sign on the road through Paju, Gyeonggi, into North Korea. [YONHAP]


In the latest of a series of blistering statements from Pyongyang, North Korean leader Kim Jong-un’s younger sister warned of retaliatory actions of a military character towards South Korea.

Blasting the South for taking belated measures to restrict activists from sending propaganda leaflets into the North — acts which Pyongyang has used as justification to cut ties with Seoul last week — Kim Yo-jong’s statement on Saturday was the third declaration in two days from top North Korean officials making plain the regime’s patience with the South and the United States had run out.

“I feel it is high time to surely break with the south Korean authorities,” Kim Yo-jong said in an English-language statement carried by the state-run Korean Central News Agency.

“By exercising my power authorized by the Supreme Leader, our Party and the state, I gave an instruction to the arms of the department in charge of the affairs with enemy to decisively carry out the next action,” she added, referring to what she warned would be a “complete collapse” of the inter-Korean liaison office in the North’s border town of Kaesong.

The reference to "enemy" seems to be to South Korea. Last week Pyongyang seized on the propaganda leaflet issue, which has been a headache for successive South Korean governments, to justify its severing of all communications with the South, and announced it would henceforth regard Seoul as an “enemy.”

A more ominous threat followed, with the younger Kim declaring the “right to taking the next action against the enemy will be entrusted to the General Staff” of North Korea’s military.

“Our army, too, will determine something for cooling down our people's resentment and surely carry out it, I believe,” she added.

While reviving the threat of some kind of armed provocation, the statement shows how icy inter-Korean relations have become in the year of diplomatic stalemate between Washington and Pyongyang over the latter’s denuclearization.

South Korean President Moon Jae-in, who received worldwide acclaim for reopening dialogue with Pyongyang around the time of the 2018 Winter Olympics, now faces the risk of nearly all of his diplomatic achievements with the North becoming undone.

Kim Yo-jong, who appears to be in charge of tough rhetoric toward the South, warned in a statement on June 4 that the regime had in store a series of punishing actions ranging from the shutting of the two countries’ liaison office, bulldozing of the South’s properties at the Kaesong Industrial Complex and Mount Kumgang, and scrapping a military agreement on ending hostilities on the heavily fortified demilitarized zone.

South Korea’s Ministry of Unification, its top inter-Korean agency, said Sunday it was regarding the current situation “with gravity,” while urging the North to work towards enforcing the joint military agreement signed in September 2018. The Ministry of National Defense released a similar statement, saying Seoul's military was keeping a close watch on any movements from the North.

Kim Yo-jong’s newest statement followed those from United Front Department Director Jang Kum-chol and Minister of Foreign Affairs Ri Son-gwon on Friday, which were also leveled against the Blue House and the White House and blamed the two governments for frittering away the brief détente on the peninsula. 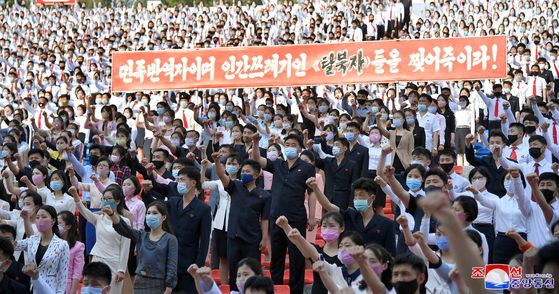 North Korean youths partake in a state-sponsored rally held in Pyongyang on June 6 to denounce propaganda leaflets from South Korea sent by resettled North Korean defectors. Such protests have continued in the North for days. [YONHAP]


Jang, who heads a powerful organization in the North in charge of diplomacy and espionage with the South, blamed the South Korean government for lacking the will or strength to enforce the commitments made towards ameliorating inter-Korean relations, throwing doubt on Seoul’s decision to crack down on leaflet distribution.

Calling South Korean authorities “weak and incompetent,” Jang said Seoul had violated prior agreements reached between the two Koreas and “smashed to pieces the confidence” between the countries by failing to take action.

On the second anniversary of Kim Jong-un’s first summit with U.S. President Donald Trump at Singapore on June 12, 2018, Ri on Friday announced Pyongyang will never again offer concessions to the United States “without receiving any returns.”

Accusing the Trump administration of seeking regime change in the North with economic sanctions while simultaneously propping up diplomacy with Pyongyang as a political achievement, Ri said the North would continue to work on “further bolstering the national nuclear war deterrent” in response to threats stemming from the United States.

“Whenever [U.S. Secretary of State Mike] Pompeo and other U.S. statesmen open their mouths, they make nonsensical remarks that the denuclearization of the Korean peninsula is still a secure goal of the United States,” Ri said.

“The secure strategic goal of [North Korea] is to build up more reliable force to cope with the long-term military threats from the U.S.”

The response from Washington to these increasingly bellicose statements from Pyongyang was, at best, unoriginal.

Repeating its earlier response to the North’s decision to cut ties with South Korea last week almost verbatim, the U.S. State Department Sunday expressed “disappointment” with the North’s actions, and urged Pyongyang to return to negotiations over denuclearization.

A more transparent account of the current administration’s perspective on foreign entanglements, including that in the Korean Peninsula, was delivered by Trump himself in a graduation address delivered at the U.S. Military Academy at West Point Saturday.

“We are ending the era of endless wars. In its place is a renewed, clear-eyed focus on defending America’s vital interests,” Trump said.

“It is not the duty of U.S. troops to solve ancient conflicts in faraway lands that many people have never even heard of. We are not the policemen of the world.”