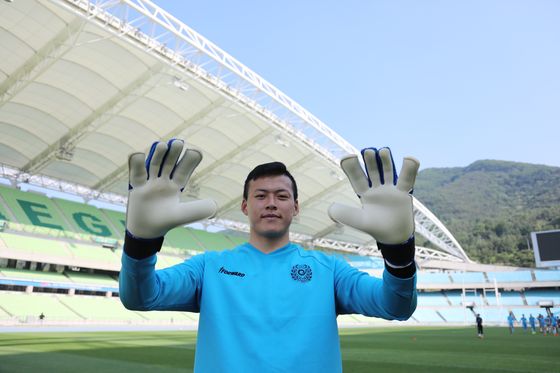 Goalkeeper Gu Sung-yun has put aside his success in the Japanese football league this season, as he embarks on a new career in the K League 1.

Up until last season, Gu has been a notable goalkeeper on the J League. Having played for Hokkaido Consadole Sapporo, he’s made headlines every season with his super saves to help the club slowly make their way up to the middle of the standings. Since Consadole Sapporo got promoted to the top league in 2017, the club has finished 11th, fourth in the 2018 season and 10th in the 2019 season.

With his performance, every year the transfer market opened up, Gu received better offers from some of the top teams in the J1 League. But this time, he put aside the bigger contracts and signed with Daegu FC of K League 1 on May 29.

“Honestly, ahead of this season, I extended my contract with Sapporo until 2024,” Gu said. “But after talking with the club, we canceled our contracts and I chose Daegu as a [free agent].”

A major driver behind his decision to return could be Korea's military service requirement, which he has not yet completed. To join the Sangju Sangmu military football team, players have to be registered in the K League before they are 27 years old.

Gu still could have waited until 2021 to return, but he said the pandemic was what ultimately drove him to come back to Korea this year.

“With the coronavirus outbreak, whenever I heard news about it I was really worried about my grandma, who raised me,” Gu said. “She lives alone at an old house, and when I'd think of the possibility of her getting sick, I couldn’t focus on football. I just had to return to Korea as quickly as possible.”

Born in Pohang, North Gyeongsang, Gu's parents divorced when he was young, and he was raised by his mother and his grandma. After playing for Jaehyun High School, Gu expanded his career in Japan by joining the Cerezo Osaka’s youth team in 2012. The following year he starting playing for Cerezo Osaka in the J1 League. Having made zero appearances with Osaka, Gu joined Sapporo in 2015, where the team was in the J2 League at the time.

The opportunity allowed him to become one of the top goalkeepers in the J1 League.


His recent decision to play in the K League came with a substantial financial sacrifice. He signed with Sapporo at 100 million yen ($930,000) but by choosing Korea, his new contract is just a fraction of his J1 League income, at 36 million won ($30,000).

The K League requires players who made their pro debuts overseas to sign as a rookies when they return to Korea.

“If my priority was the financial issue, then returning K League would have been nonsense,” Gu said. "Just to be able to be closer to my grandma and to meet a great team like Daegu, I’m happy. With the money I saved so far, I opened up a restaurant in Kobe [Japan], for my mother. Since I’m still young, I can earn more money.”

One of Gu's immediate goals is to compete in the Tokyo Olympics, as one of three wildcards. As the men’s football tournament at the Olympics has a maximum age limit of 23 years old, with the exception of three wildcards, Gu hopes to be added onto head coach Kim Hak-bum’s roster.

A medal of any color will grant Gu a military exemption, but that’s not the only reason he hopes to compete at the Olympics.

“Back at the 2016 Rio Olympics, I appeared as a starting goalkeeper, but we ended our journey right at the quarterfinals,” Gu said. “Throughout three matches — two group stage matches and the quarterfinals — I gave up one goal. But that one goal took away all my dreams.”

Since giving up that one goal, Gu said that he has continuously told himself he will redeem himself the next time by returning to the Olympics.

“As I gain experience after every season, I feel a bigger weight of the emblem embroidered on the chest of my uniform,” Gu said. “Whether it’s the national team or the club I play for, I’m ready to give it my all for that team. As of right now, I’m going to give it my all to help Daegu advance to the upper split.”

Tottenham beat Burnley to move two points ahead of Arsenal