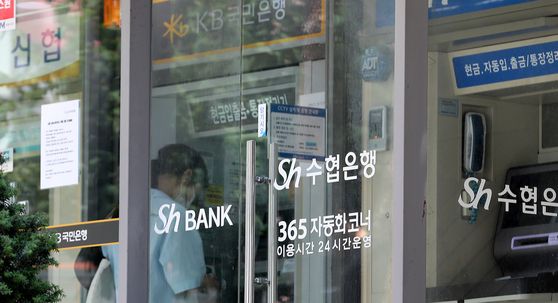 A person draws cash from an ATM machine. [NEWS1]


Local banks slashed interest rates on deposits to near zero in line with the central bank's cutting of the base rate to an all-time low of 0.5 percent.

Among the top five commercial banks — Shinhan, KB Kookmin, NH Nonghyup, Woori and Hana — all except for Hana cut their deposit rates by a range of 0.3 percent to 0.75 percent, accelerating an era of ultra-low yields.

KB Kookmin Bank was the first on June 5, lowering interest rates on its checking accounts by an average 0.47 percentage points.

Shinhan Bank, Noghyup Bank and Woori bank followed last Friday. In the case of Shinhan, the bank slashed the deposit rates from 0.05 to 0.5 percentage points.

Shinhan’s most popular one-year savings plan, which had a 0.9 percent annual interest rate was cut by 0.3 percent. Installment savings were also affected, as the company lowered the yield to below one percent. There are only seven installment savings plan offered by the bank with interest rates of more than one percent, a huge drop compared to early May when there were 17.

NH Nonghyup Bank lowered the interest rates for its checking accounts, one-year savings plans and installment savings by up to 0.4 percentage points last Friday. The average annual interest rate for the bank’s savings accounts dropped from 0.7 percent to 0.45 percent. It also slashed yields on its installment savings plans from 0.9 percent to 0.7 percent.

The situation may become frantic for so-called “interest rate nomads,” customers who migrate from bank to bank in search of higher yields. For some time, theses yield hunters were driven to savings banks, such as SBI Savings Bank, that have higher interest rates than commercial banks.

Savings banks in Korea are more like consumer finance companies in other countries. 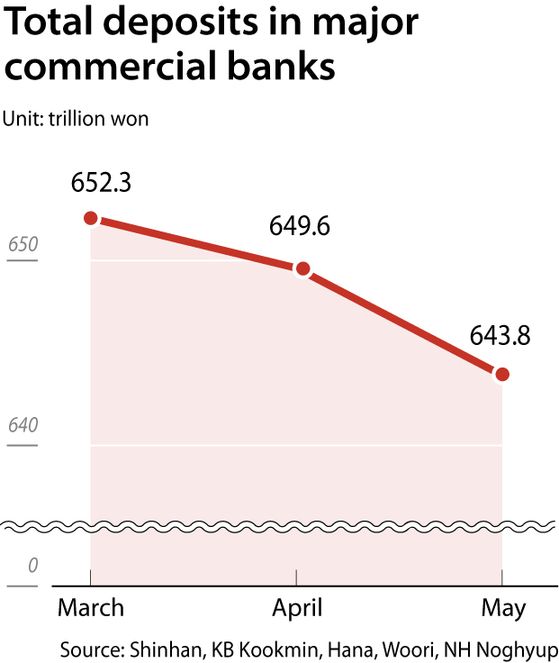 The deposit balance for the five major commercial banks moved in the opposite direction, dropping around 8.5 trillion won from March through May to reach 643.8 trillion won.

However, even savings banks had to shave some of its high-interest rates in line with the Bank of Korea. The average interest rate for savings accounts stands at a historic low of 1.88 percent, according to the Korea Federation of Savings Bank last Friday.

Analysts are seeing more money flow into brokerage houses and high-risk investments that offer, at least theoretically, bigger returns. On June 11, total customer deposits at brokerage firms, which refers to the sum of money placed with such firms to buy stocks, reached 45.8 trillion won, increasing by 12.8 trillion won or 38.8 percent in just three months.

The Korea Institute of Finance warned in a report published recently of an “excessive amount of cash flow” into high-risk investments, as financial institutions and retail investors hunt for higher profits.

“We might see funds concentrated in high-risk investments such as derivatives and bio-related stocks in the future,” said the report.

Meanwhile, total deposits in U.S. dollars have increased rapidly in recent months as investors seek stable assets at a time of economic uncertainties.

According to data from the banks, the total dollar balance at the five commercial banks surpassed $47 billion on June 11, up 28 percent compared to February when the coronavirus was at its early stages around the world. For May, the total balance saw a 29 percent increase compared to the same month last year.

Line up to save up