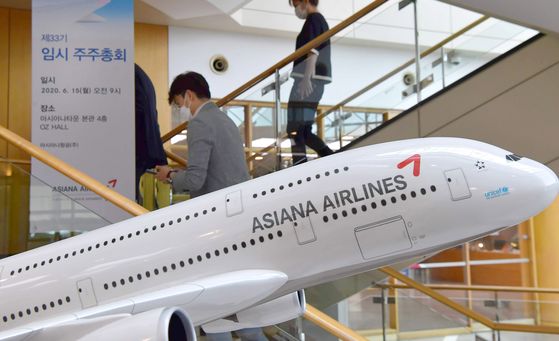 A model of an Asiana plane displayed at the airliner's headquarters in Gangseo District, western Seoul, on Monday where a shareholder meeting was held. [YONHAP]

Asiana Airlines, Korea's second-biggest carrier, said Monday it has raised the ceilings on stock and bond issuance in a bid to secure more funds amid new coronavirus worries.


In an extraordinary shareholder meeting earlier in the day, Asiana shareholders agreed to a plan to raise the issuance limits of its stocks and bonds convertible into stocks, the company said in a statement.

The airline is able to sell up to 1.3 billion stocks, up from the current 800 million, and the limit for convertible bonds was raised to 1.6 trillion won ($1.3 billion) from 700 billion won, it said.

The move is also widely seen as part of the company's steps for HDC Hyundai Development's planned acquisition of new shares to be issued by Asiana.

In December, HDC formed a consortium with major financial group Mirae Asset Daewoo to acquire a 30.77 percent stake in Asiana from Kumho Industrial, as well as new shares to be issued and Asiana's six affiliates, for 2.5 trillion won.

Back then, the HDC-led consortium and Kumho Industrial agreed to close the deal by June 27. But the HDC consortium last week asked for a renegotiation with Asiana's creditors — the state-run Korea Development Bank (KDB) and the Export-Import Bank of Korea (Eximbank) — over its planned takeover of Asiana.

HDC described the current coronavirus crisis as "never expected and a very negative factor," which will greatly affect the acquisition plan.

HDC also picked Asiana's snowballing debts as another reason for the renegotiation that is "damaging the acquisition value of the carrier."

Asiana's debts have increased by 4.5 trillion won since July last year, and its debt-to-equity ratio skyrocketed by 16,126 percent on a parent basis at the end of March from end-July.

Main creditor KDB accepted the request and said HDC needs to come to the negotiating table instead of sending a letter to creditors or releasing a press statement.

As creditors and related parties are expected to renegotiate the terms, the closing of the deal looks set to be delayed until the end of this year.

Asiana, hit hard by the coronavirus outbreak, has suspended most of its flights on international routes since March and is in dire need of a cash injection due to the virus impact.

Its net losses for the January-March quarter deepened to 683.26 billion won from 89.18 billion won a year earlier.

HDC had reiterated its plan to acquire Asiana, dismissing speculation that it may have difficulties in taking over the company due to the economic fallout from the coronavirus outbreak.

Regulators in the United States, China, Kazakhstan, Uzbekistan, Turkey and Korea approved HDC's planned takeover of Asiana. Russia is the only remaining country that is still reviewing the integration.

To help Asiana stay afloat, the KDB and Eximbank plan to inject a combined 1.7 trillion won into Asiana. Last year, the two policy lenders extended a total of 1.6 trillion won to the cash-strapped carrier.

In its latest self-help plans, Asiana has had all of its 10,500 employees take unpaid leave for 15 days a month since April until business circumstances normalize.

Asiana's executives have also agreed to forgo 60 percent of their wages, though no specific time frame was given for how long the pay cuts will remain in effect.