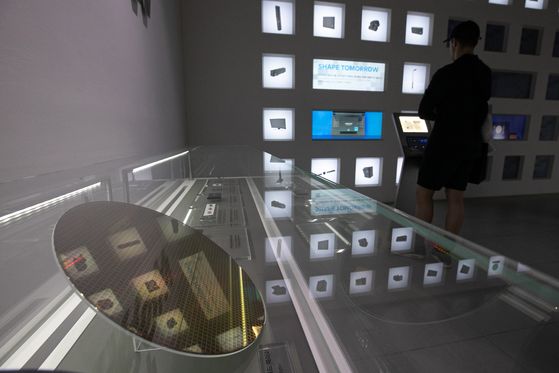 Korea’s chip industry has both failed to narrow the gap with U.S. companies and failed to grow as fast as Chinese companies over the past 10 years, according to the Federation of Korean Industries (FKI).

The business advocate group put together data from market research firms and institutes in its Monday report to assess Korea’s status in the chip market over the past decade.

Between 2010 and 2019, the United States held a dominant position in the global chip market, constantly maintaining a share between 45 and 51 percent. Korea, on the other hand, started off with a 14 percent market share in 2010 and reached as high as 24 percent in 2018.

In 2019, when the latest data is available, Korea had fallen back to 19 percent.

China’s market share remains comparatively small, but has constantly increased in the past decade, more than doubling from less than 2 percent in 2010 to a stable 5 percent by 2019. This pushed its share close to that of Taiwan, which stayed between 6 to 7 percent during the same period. The FKI cited market share data from IHS Markit.

The Korea Evaluation Institute of Industrial Technology’s assessment was that in 2017, Korea and China’s system-on-chip technology was merely 0.6 years apart. In terms of production technology, Korea was 1.2 years ahead in 2017, but this also marked a narrow decrease from 1.9 years in 2013.

Compared to the United States, Korea was still almost two years behind in system-on-chip technology, and one full year behind in production technology.

The FKI pointed out that Korea’s chip companies got significantly less government support compared to both China and the United States. According to a 2019 Organisation for Economic Cooperation and Development (OECD) report, three among five top chip companies that received government support were based in China. SMIC, which ranked No. 1 on the list, received support worth 6.6 percent of its revenue between 2014 and 2018, through funding, tax cuts and research and development (R&D) support.

U.S. companies also received support from the government: Micron received support worth 3.8 percent of its revenue while Qualcomm and Intel were also granted 3 and 2.2 percent during the same period.

This is a stark contrast from Korea’s two leading chip companies: Samsung Electronics and SK hynix. They received merely 0.8 and 0.6 percent of their revenue in support during the same period.

The Chinese government was the most aggressive in pushing the sector. Part of its support was to offer funds for Chinese companies’ merger deals to acquire technology. Between 2015 and 2018, 29 Chinese companies acquired foreign chip-related companies. In Korea, only one company did so during the same period.

The Monday report noted that government support for chip technology will intensify in the future, especially as the United States and China continue a global trade war and push efforts to grab the upper hand in cutting-edge technology. The U.S. government, for example, is preparing an “endless frontier act” to invest $100 billion into the discovery and development of new technologies.

“China has been putting in immense assets to expand its foothold in chips since five years ago," said Kim Bong-man, secretary general of FKI’s international management institute. "Even the United States is making a turn from putting an emphasis on a ‘level playing field’ to pouring in state funds to take its chip industry to the next level.”

“Semiconductors are Korea’s leading export item and yet the performance of our companies alone was what made that possible. Now it’s time that the government provides help with policies in R&D and tax cuts.”