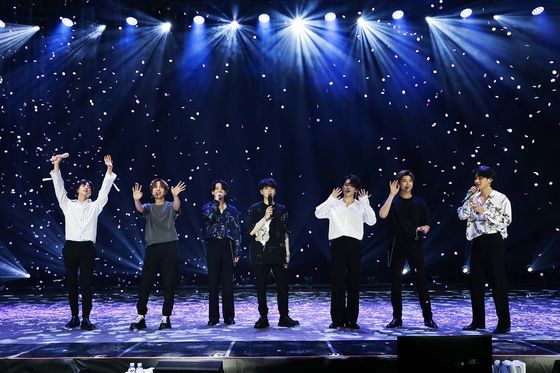 According to the agency, BTS's latest online concert attracted over 756,600 viewers from 107 countries around the world, equivalent to around 13 concerts held at Seoul's Jamsil Arena or eight concerts at London's Wembley Stadium.

This concert was the first time the agency has charged viewers an admission fee, at 29,000 won ($24) for members of the BTS fan club ARMY, and 39,000 won for the general public. The concert took a minimum of 21.9 billion won from ticket sales.

Additionally, over 10,000 new members joined ARMY thanks to the concert, the agency said.

BTS held its 100-minute long online concert from 6 p.m. Korean time, with the theme of inviting its dedicated fan ARMY into the band's room and performing for them.

Seven different stages were prepared, among which five were decorated to look like real rooms and were linked with corridors that looked like they came from people's houses. 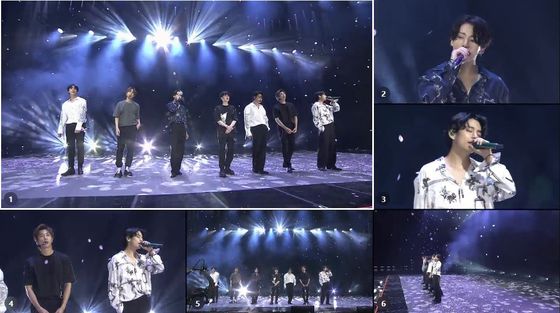 "Bang Bang Con" offered six different views of the performance on one screen, allowing viewers to toggle between different angles. Developed by Big Hit Entertainment and U.S. video solution start-up Kiswe, the setup allowed viewers to see the stage in full as well as each member up-close.

"This was the largest paid online concert to be held in the world," Big Hit Entertainment said.

"Even though the performing arts industry is struggling during Covid-19, BTS has opened up new possibilities through this online performance."