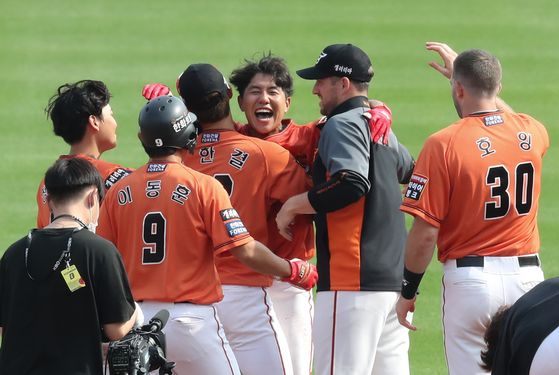 The Hanwha Eagles celebrate after picking up a win against the Doosan Bears on Sunday. With a win, the Eagles finally ended their 18-game record-tying losing streak. [YONHAP]

The Eagles had tied the all-time KBO record losing streak at 18 games on Friday, joining the now-defunct Sammi Superstars for that ignoble honor. Facing the Doosan Bears on Saturday for the second game in a three-game series, the Eagles had to pick up a win to avoid setting a whole new record. In the end, the weather turned out in the Eagles' favor, giving the team a much-needed breather as the game was suspended in the third inning with the Eagles trailing by one run.

The two teams then had to play a double header on Sunday starting at 2 p.m., but the KBO made the unusual decision to continue the game from where it left off on Saturday, in the third inning. After a tense game that saw both teams struggle to gain much ground, infielder Noh Tae-hyeong finally came through for the Eagles at the bottom of the ninth inning, finally ending the historic losing streak.

The Eagles’ victory was an especially big surprise as this is Noh’s first season playing in the KBO. He joined the Eagles back in 2014 but never earned a spot in the top league until this year. Looking at his performance this season, he has only appeared in six games with a 0.286 batting average and just one run and an RBI.


“Since I became interim manager unexpectedly, I tried different things,” said Eagles caretaker manager Choi Won-ho. “But that didn’t end our losing streak, so our players had a hard time. Since we’ve finally ended our long losing streak, we’ll try our best to show Hanwha having fun.”


Following the win, the Eagles continued their streak with starter Warwick Saupold on the mound, once again defeating the Bears 2-3.

Saupold tossed six scoreless innings and only gave up eight hits and two runs while striking out four. On the offensive side, the Eagles took an early lead with catcher Choi Jae-hoon’s home run at the bottom of the third, adding another two runs at the bottom of the fifth. Although the Bears attempted a come-from-behind victory by scoring two runs at the top of the sixth inning, they weren’t able to find that final run to tie the game.

The two straight losses also cost the Bears their No. 2 spot in the regular season standing, dropping a place to third. Sunday was also the first time this season that the defending champion has picked up back-to-back losses.

Following the Sunday games, the Eagles posted a letter of apology to their fans on their official website.

Sunday's wins might be a reason for Eagles fans to finally celebrate, but the reality is that the club still has a very long way to go to catch up with the ninth-ranked SK Wyverns, as they are currently 3.5 games behind. The Eagles are the only team in the KBO to have picked up less than 10 wins so far this season.

Looking at the regular season standing, the NC Dinos are keeping their game strong by maintaining the top spot in the league. However, their weekend series against the Kiwoom Heroes wasn’t the best as they lost the series 2-1. The only good news was their win on Sunday.

On Saturday, the Heroes took home a big win as they scored 18 runs against the top-ranked team.

Over in Jamsil, the LG Twins were the ones to end the Lotte Giants’ six-game winning streak. They first defeated the Giants 3-2 on Friday and picked up a huge 10-6 come-from-behind victory on Sunday. It was a dramatic win for the Twins, as they were losing 0-4 until the end of the fourth inning. In the fifth and the sixth innings, the Twins scored 10 runs to get the win. 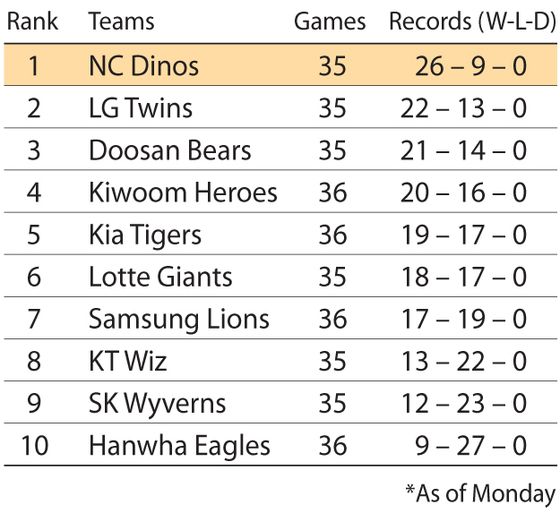 The Kia Tigers won their weekend series against the Wyverns in their away game at Munhak Baseball Stadium in Incheon. Despite winning the series, it wasn’t the best finish for the Tigers as they lost Sunday’s game 3-4.

The Dinos will be heading to Gwangju to play their three-game series against the Tigers, while the Giants will head over to western Seoul to play the Heroes at Gocheok Sky Dome. The Eagles will continue their season at home against the Twins.