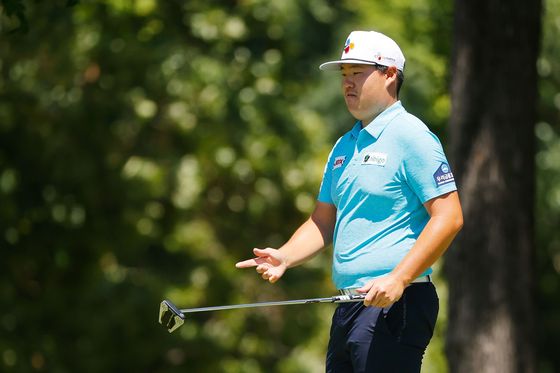 Im Sung-jae reacts after a putt during the final round of the Charles Schwab Challenge at Colonial Country Club in Fort Worth, Texas on Sunday. [GETTY IMAGES/YONHAP]

Even after a long delay caused by the global coronavirus pandemic, some things don't change in golf: Im Sung-jae playing at a PGA Tour event and Im finishing inside the top 10.

The Korean star posted his third consecutive top-10 finish as the tour resumed with the Charles Schwab Challenge in Fort Worth, Texas, on Sunday (local time). Im shot a three-under 67 in the final round for a four-round total of 11-under 269 at Colonial Country Club. He tied three others, including world No. 4 Justin Thomas, for 10th place.

Im, the reigning Rookie of the Year, began his top-10 streak with his first-career victory at the Honda Classic on March 1. The very next week at the Arnold Palmer Invitational, Im finished alone in third.

The performance at Colonial was Im's sixth top-10 finish of the season, which puts him in a three-way tie at the top with Thomas and world No. 1 Rory McIlroy for the 2019-20 season.

Im also maintained his lead at the top of the FedEx Cup standings. The top 125 in the FedEx Cup points at the end of the regular season in August will get into the three-tournament FedEx Cup playoffs.

Those three events feature a progressive cut, meaning the field of 125 for the Northern Trust gets reduced to 70 for the BMW Championship and only the top 30 will be eligible for the season-ending Tour Championship.

Last season, Im was the only freshman to qualify for the Tour Championship, and he was later voted by his peers as the Rookie of the Year.

The Charles Schwab Challenge was the first PGA tournament in three months, and was played without fans and with strict quarantine measures in place.

The Players Championship was canceled after the opening round on March 12 due to concerns over the coronavirus outbreak. Several other tournaments were canceled or rescheduled during the pandemic.

Im shot in the 60s in all four rounds. He opened Sunday with a birdie at the first hole and had another at No. 3. He dropped a shot with a bogey at the fifth but got it right back with his third birdie of the day at the sixth.

Among other Korean players, An Byeong-hun ended in a four-way tie for 60th at one-over 281. Kang Sung-hoon, Kim Si-woo and Lee Kyoung-hoon missed the cut.