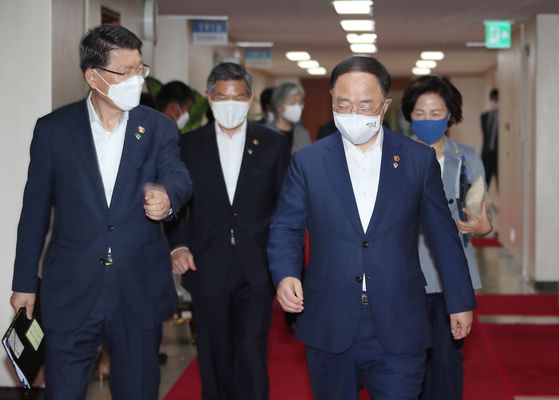 Finance Minister Hong Nam-ki, right, heads to a meeting of ministers at the government complex in Seoul on Tuesday. [YONHAP]


The basic income, which is gaining support from some quarters in Korea, is facing significant resistance at the highest levels.


Finance Minister Hong Nam-ki on Tuesday said he “could not agree” with the idea of granting every person in the country a monthly stipend.

“Giving out 300,000 won [$250] to every single person would cost 200 trillion won a year,” Hong said, stressing that the government spends already 180 trillion won on welfare a year. “Is it right to burden our children?”

During a forum, the finance minister said no other country has adopted a basic income, and current conditions do not justify the institution of a basic income in Korea. He added that any talk of a basic income would have to come with an accompanying discussion about welfare restructuring.

He asked if it is right to scrap support to people in difficult situations, including those with medical bills, and unilaterally hand out money so that they can purchased a loaf of bread, a reference to a comment made by the United Future Party leader Kim Chong-in, who first proposed the idea.

“There’s a need to discuss which is more effective — giving 100,000 won so that even the top income earners can buy bread or if support goes to those with no income because they were pushed out from the job market,” Hong said.

“It showed the concern that in reforming the welfare system, it could go against fairness,” Hong said.

Amid the coronavirus crisis, the United Future Party leader Kim earlier this month suggested a basic income, saying that every household in Korea should be able to purchase a loaf of bread.

The idea quickly gained support from politicians, especially Gyeonggi governor Lee Jae-myung. Lee is strongly pushing for the adoption of a basic income, arguing it is possible without raising taxes or even harming the government balance sheet.

Democratic Party presidential hopeful and former Prime Minister Lee Nak-yeon said he understands the intention of the basic income, but adds that he is uncertain about it. He welcomes a debate on the issue.

Government expenses have significantly increased due to the pandemic.

When including the four social insurances, the deficit grows to 56.6 trillion won, an all-time record and a 45.9 percent increase from last year’s 38.8-trillion-won deficit in the same period.