LG Electronics rolls out the Velvet in Europe, with U.S. soon

LG Electronics rolls out the Velvet in Europe, with U.S. soon 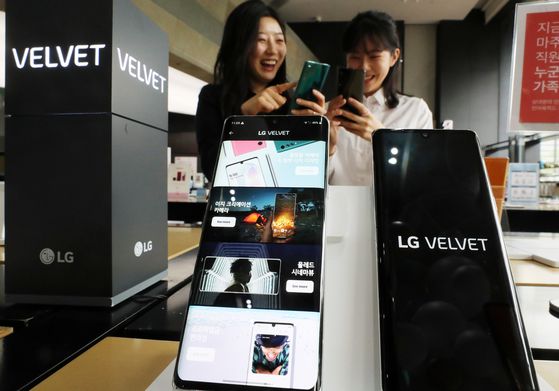 Models check out LG Electronics' new smartphone, the Velvet, on May 19 at a store in Seoul. [YONHAP]

LG Electronics on Tuesday introduced its new smartphone, the Velvet, in Europe as the Korean tech firm hopes its latest handset can end a long slump in its mobile business amid the virus pandemic.

Starting with Germany on Tuesday, LG will release the Velvet in major European countries, like Italy, Spain and the Netherlands. The company said it will also launch the Velvet in the Americas in the coming weeks.

LG said the Velvet will be available in 10 colors, including new colors like aurora silver, in overseas markets.

"Due to the virus situation, our overseas marketing will be based on non-face-to-face activities," said Johan Chung, executive vice president of overseas sales and marketing at LG's mobile business.

LG's new handset emphasizes the design of three rear cameras that descend in order by size, evoking the image of falling raindrops. It also applied 3D Arc Design, which makes the edges of the display and rear symmetrically curved.

The Velvet houses a 48-megapixel main camera, an 8-megapixel ultrawide lens and a 5-megapixel depth sensor on the back, while sporting a 16-megapixel selfie camera on the front. The device, which has a 6.8-inch FullVision display, packs a 4,300-milliampere-hour battery.

LG took a 2 percent share of the global smartphone market in the first quarter of the year, according to market tracker Counterpoint Research, with its first-quarter smartphone shipments dropping more than 27 percent on year to 5 million units.