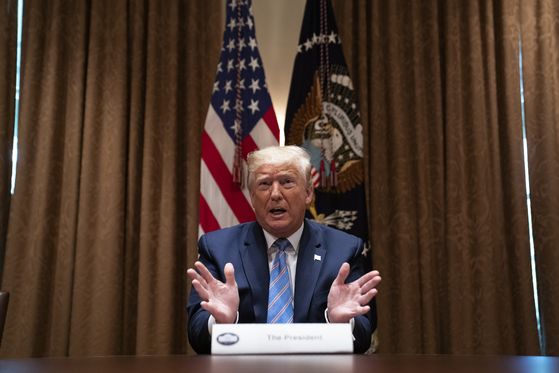 U.S. President Donald Trump says he will cut the number of U.S. troops in Germany by half during a roundtable at the White House in Washington on Monday. [AP/YONHAP]

U.S. President Donald Trump said Monday he will cut the number of U.S. soldiers in Germany by about half, fueling concerns in Seoul he could make similar reductions to American troops in Korea.

“One of the only countries that hasn’t agreed to pay what they’re supposed to pay is Germany,” Trump said to reporters at the White House in Washington. “So I said, until they pay we’re removing our soldiers, a number of our soldiers, by about half. And then when we get down to 25,000, we’ll see where we’re going.”

Trump claimed that Germany was “delinquent” in payments to NATO and has been treating the United States “very badly on trade.”

He added, "And I'm not only talking about Germany, by the way; I'm talking about plenty of other countries," without specifying further.

Trump has pressured allied countries, including Korea, to pay more for defense, and has since campaign days threatened to reduce or withdraw U.S. troops in certain regions if they don't.

The United States has some 34,500 troops in Germany, so a cap of 25,000 soldiers would be closer to a 30 percent reduction. In his remarks Monday, Trump estimated there were 52,000 American soldiers in the country, a figure seen to include U.S. Defense Department civilian employees.

Trump said the United States is also negotiating with Germany on trade issues but that he is “not satisfied with the deal they want to make.” He went onto describe Germany as “by far the worst abuser.”

He said that he told Germany: “Look, we’re protecting you. You have to pay your bills.”

Seoul and Washington have been struggling to renew a defense cost-sharing agreement after the previous bilateral Special Measures Agreement (SMA) expired at the end of last year. The two countries revised the Korea-U.S. FTA in 2018.

The Trump administration has been calling on Seoul to pay a larger contribution for the stationing of some 28,500 American troops in Korea. Washington reportedly is requesting $1.3 billion a year, down from its original demands of $5 billion, while Seoul said its best offer is 13 percent more than what it paid last year, or around 1.17 trillion won ($965.6 million). In the previous 10th SMA, signed in February 2019, Seoul agreed to pay 1.0389 trillion won, which amounted to some $920 million at the time, or about 8.2 percent more than what it spent the previous year.

Trump said last December that the necessity of keeping U.S. troops in Korea “can be debated” ahead of a NATO summit in London.

Richard Grenell, Trump’s former U.S. ambassador to Germany, told German newspaper Bild last week that the president has made clear that he wants to bring back U.S. troops stationed in Korea, Japan and other allied countries. Grenell said that Americans are tired of paying for the defense of other countries.

According to the Defense Manpower Data Center of the U.S. Department of Defense, as of March this year, Japan hosted the highest number of U.S. troops at 55,165, followed by Germany with 34,674 soldiers. Korea came in third with 26,184 U.S. troops.

A reduction as ordered by Trump could see U.S. troop presence in Germany fall to the third highest level, following Korea.

Addressing concerns over Washington possibly reducing U.S. troops in Korea, Lee Jae-woong, the deputy spokesman of the Korean Foreign Ministry, said in a briefing in Seoul Tuesday, “Korea and the United States share a firm recognition of the necessity of the U.S. Forces Korea and the role it plays in preserving peace and stability on the Korean Peninsula and in Northeast Asia.”

He added that the issue of U.S. troop reduction has “not been mentioned at all” in the defense cost-sharing negotiations.

The U.S. National Defense Authorization Act (NDAA) for 2020 prevents the reduction of U.S. troops in Korea below the current level unless the U.S. defense secretary certifies that it is in the U.S. national security interest.

Despite continued delays in sealing the 11th SMA, Seoul and Washington struck a separate deal at the beginning of the month enabling the Korean government to fund the wages for Korean employees of the U.S. Forces Korea (USFK) through the end of this year. Over 4,000 Korean personnel working for the USFK who had been furloughed since April 1 finally returned to work Monday.