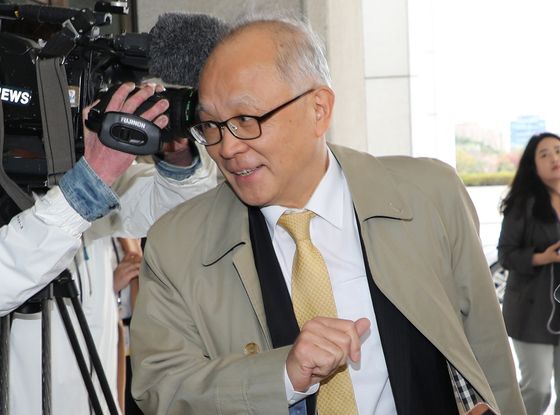 A former Supreme Court justice who was supposed to lead a review of a criminal investigation into Samsung leader Lee Jae-yong recused himself Tuesday saying he had a potential conflict of interest.

Yang Chang-soo, who was named chairman of a panel of outside experts reviewing the case, issued a statement Tuesday and said he will step down after the panel is formed.

Choi was a vice chairman of Samsung’s now-dismantled Future Strategy Office. He and Yang were Seoul High School classmates.

Lee, vice chairman of Samsung Electronics and de facto head of the country's largest business group, and two of his key aides — Choi and Kim Jong-joong, both from Samsung’s Future Strategy Office — are suspects in an ongoing investigation by the Seoul Central District Prosecutors’ Office.

The prosecutors are investigating whether they broke laws to help Lee take control of the conglomerate from his father, Lee Kun-hee, who has been hospitalized since 2014 after a heart attack, through the 2015 merger of Samsung C&T and Cheil Industries, along with a case of suspected accounting fraud at Cheil affiliate Samsung BioLogics.

“Since Choi is facing the same charges as other suspects, my relationship is reason enough to recuse myself from this case,” Yang said.

The review was applied for by Lee, Kim and Samsung C&T earlier this month. Last week, a citizens’ panel of the Seoul Central District Prosecutors’ Office granted their application for an outside experts’ review to decide the validity of the probe.

“When Yoon announced Friday the start of the process, I started thinking about recusing myself,” Yang said. “Before making public my position, I needed to verify more details about the case. I was able to do so on Monday.”

Local media reported that Yang had another conflict of interest involving his brother-in-law, Dr. Kwon O Jung, president and CEO of Samsung Medical Center. Lee is the chairman of the foundation that oversees the hospital.

Yang said he consulted with the prosecution before announcing his decision to recuse himself.

Yang will still chair the process of selecting 15 outside experts who will review the case on June 26. One of the 15 members will take over his role as chairman during the review.

The prosecution will randomly select 15 members from its pool of more than 150 outside experts.