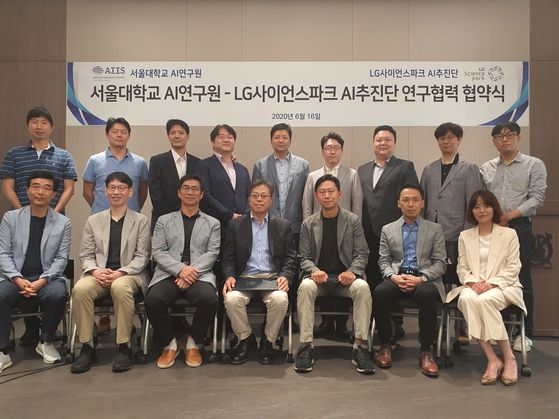 
A corporate research initiative and a university are collaborating in support of artificial intelligence (AI) development.

LG Science Park and the Artificial Intelligence Institute of Seoul National University (AIIS) signed the agreement on Tuesday at the campus in Gwanak District, southern Seoul.

“LG will further foster networking in the AI sector and come up with an opportunity for joint research through constant gathering to share research progress,” it said in a statement, adding that there will be internships and personnel exchanges among the two institutions.

Meetings will be held between the two with the intention of initiating joint projects, though no specific subject or focus have been decided as of yet.

Founded in December, 2019, the AIIS pull together 2,000 researchers and professors at the university.

It explores a wide range of areas, including AI-powered robots, autonomous cars and semiconductors.

The Science Park was built in 2018 and houses some 20,000 researchers from eight LG companies, including LG Electronics, LG Display and LG Innotek, to delve into studying the latest technologies and application.

The initiative is the latest alliance between the group and an academic institute for AI.

LG Electronics signed a partnership in January with Kaist to provide AI courses developed by Kaist for its employees.