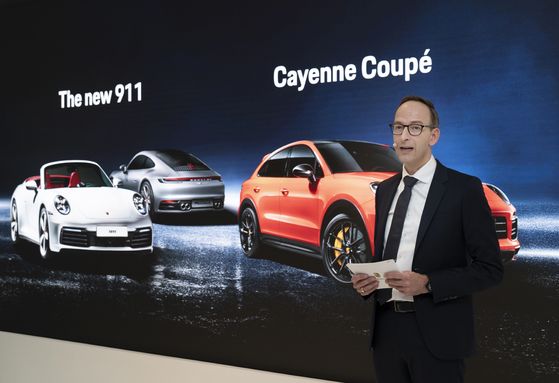 
Porsche Korea will fortify its eco-friendly lineup, launching its first fully-electric range, Taycan, in the latter half of this year.

The Taycan 4S will launch in November this year at the earliest, while the Turbo and Turbo S lineups will follow next year.

“There are levels of uncertainties due to the Covid-19 impact [regarding exact launch dates],” said Holger Gerrmann, CEO of Porsche Korea, during a press conference held June 16 at its recently opened Cheongdam showroom in southern Seoul.

“However, we expect that [the] local market won’t be much affected by the virus.”

The Taycan 4S, the German high-end carmaker's first-ever full-electric model, is a four-door sports sedan that doesn’t veer too far away from its iconic 911 model’s design language.

Gerrmann described it as a “bridge that merges tradition to the future by combining typical Porsche performance and everyday usability.”

In line with its planned launch of electric models, Porsche Korea revealed plans to set up charging infrastructure in Korea. Starting with nine high-power chargers at its showrooms, it said it will build 10 more at various locations across the country. More slowly-charging AC chargers will also be installed at 120 locations nationwide.

The carmaker hasn't rushed to introduce eco-friendly engines, as its legacy as a manufacturer of sports cars powered by internal combustion engine still appeals highly to car aficionados.

Gerrmann had high hopes for the brand in Korea this year, despite production and delivery disruption due to the coronavirus pandemic.

“It is going to another strong year despite the coronavirus,” he said.

Porsche Korea had already launched two new revamped models, the 911 and Cayenne Coupe, this year and it doesn't stop there. Aside from the Taycan, Porsche will launch overhauled versions of the Cayenne E-Hybrid, Cayenne E-Hybrid Coupe, Macan GTS, 911 Targa and 911 Targa 4S Heritage Design Edition by the end of this year.

As of May this year, Porsche has already sold 3,433 units, a 46.3 percent year-on-year jump, according to sales data from Korea Automobile Importers & Distributors Association.