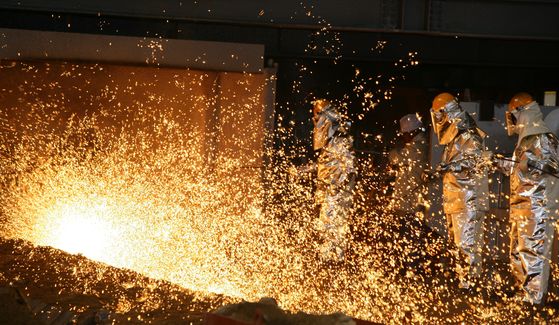 Posco has idled a part of its production facility for the first time in over a decade.

With demand falling, steel production was temporarily suspended in Gwangyang, South Jeolla, and Pohang, North Gyeongsang, on Tuesday, a move not taken since 2009 when the economy was reeling from the global financial crisis.

The company, one of the largest in Korea, will also furlough some workers at 70 percent of normal salary. It is the first time Posco has ever taken a measure so extreme.


“We are adjusting production of some of our products in a flexible operation system, and it hasn't been decided when to resume,” said Kim Hee-gon, a spokesperson at Posco.

“It could differ by worker, but it will be up to 10 days at maximum,” Choi said on Wednesday, after he attended an event to celebrate the creation of a 100-billion-won ($8.2 million) fund for smaller steel companies.


Posco has taken a direct hit from reduction of automobile and shipbuilding production as a result of the pandemic.


The chairman painted a gloomy outlook for earnings in the second quarter in line with analysts, who are projecting an operating loss for the period.


It "could be a tough time for the steel industry,” he said, but if the coronavirus eases, he said, the recovery will likely begin in the third quarter.


Market analysts take a more conservative view on prospects, with eleven local brokerage research heads seeing improvement in the steel industry taking place in the second half of 2021, according to the Federation of Korean Industries.


Of 15 key exports, steel may recover at the slowest pace.


In addition to the two blast furnace operations being idled, the reopening of a facility at Gwangyang 3-Goro in South Jeolla may be delayed after repairs were finished last month. A recent fire at a Posco steel mill in Pohang on June 12 adds to the existing concerns.


Posco is not alone in production halts.


Hyundai Steel shut down an electric arc furnace plant in Dangjin, South Chungcheong, earlier this month due to a decrease in demand and the plant’s low profitability.


Hyundai Steel, Korea's second largest steelmaker after Posco, announced it decided to temporarily shut the plant for a month as demand for hot rolled steel fell. The steel company added that the drop in demand started before the coronavirus outbreak.