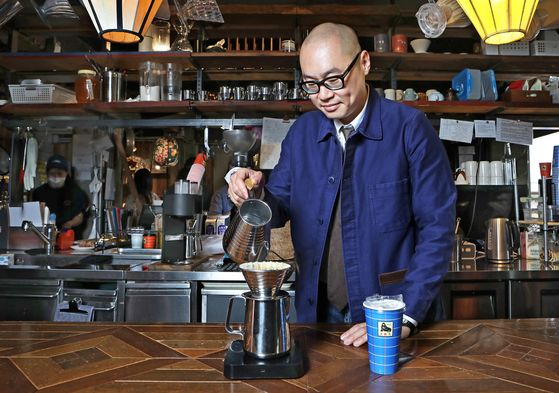 Kim Byung-ki, one of the founding members of Fritz Coffee, brews a cup at the company's store in Dohwa-dong, in western Seoul's Mapo District, one of the three Fritz Coffee stores in Seoul. [PARK SANG-MOON]


For Fritz Coffee, a brand easily recognizable with its retro-style logo, simply offering their hand-selected brews at coffee shops was not enough.

While it has only three branches in Seoul, its coffee is much more widespread across Korea and the world, as many smaller shops and cafes source their beans from Fritz.

This strategy of running their own stores while also providing beans for others is a factor behind their loyal customer base.

And for some, just one cup of coffee at the cafe isn’t enough, Fritz has created a subscription service that allows them to enjoy their beans in the comfort of their own homes.

Kim Byung-ki, who is in charge of overall branding and the sourcing of beans, is one of six talents who have built the brand up since its launch in 2014. They take care of everything from the small baked goods served at the cafes, to the bean selection, to the roasting. 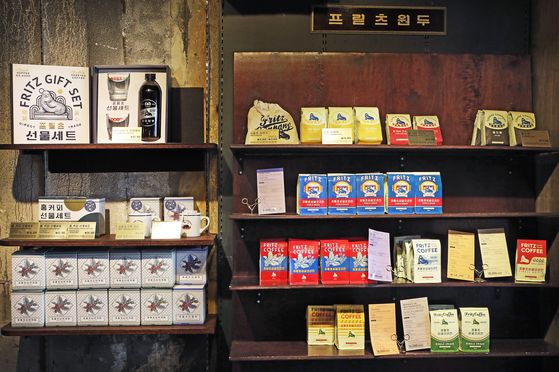 The coffee brand has lots of merchandise available featuring its retro-style logo and mascot. [PARK SANG-MOON]


Kim is also in charge of the first Fritz Coffee store that opened in Dohwa-dong, in western Seoul’s Mapo District. The two others are located in Yangjae, in southern Seoul’s Gangnam District, and Wonseo-dong in central Seoul’s Jongno District. All three stores are covered in retro designs, which the brand has been a fan of long before it became a trend in Korea.

“It is all about the energy we have within the system,” said Kim, who used to think that the sustainability of a brand is about how customers see it.

“Branding is so important. Because everything that is shown to the customers comes from all of us who are behind the brand, we need to be on the same page to deliver a consistent message to customers.”

Kim and the other founding members invest a lot into educating Fritz Coffee employees, so that they can figure out what they can contribute to the coffee-making and more importantly whether they can use their time working at Fritz to achieve their goals. Unlike most cafes that hire part-time workers, at Fritz Coffee shops everyone is a full-time employee.

“Coffee is like kimchi,” said Kim, adding that an average Koreans can differentiate between different kimchi's but still enjoy a wide variety of the side dish.

Just like people trust their favorite chef to explain the origins of certain ingredients or a sommelier to recommend the perfect wine to pair with their food, the staff at Fritz have the built the same reputation when it comes to coffee.

“We don’t force people to know about the differing details between one coffee to another, but when they ask and show interest, we are happy to share everything we know, like which coffee beans are in season and how a certain coffee may taste lighter depending on the level of oxygen and pressure used to brew it.”

Kim admits that when he first fell for coffee he was unrealistic about what the scene was really like. 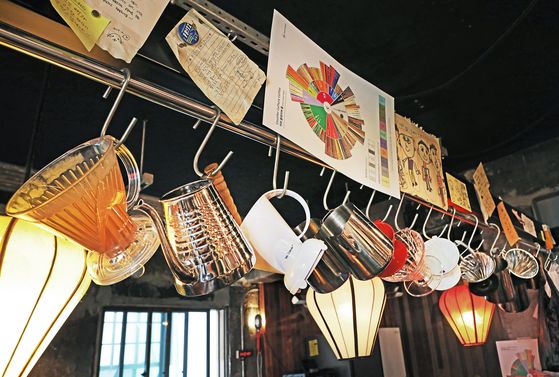 
It took traveling all around the world trying to find different beans to cater to people with different tastes to realize the handwork that goes on behind the scenes. The time he took building direct-trade relationships and friendships has been a great help to him now, when international shipping isn’t as convenient as before due to the coronavirus pandemic.


The coffee scene, Kim said, isn't really restricted in communication no matter where you are in the globe. Producers, suppliers and companies are all connected online through YouTube videos and other social media services and make sure to stay connected and share the most up-to-date information or trends seen in their own countries.

“Before, a high percentage of people was more focused on glamorous things that are shown on the surface, but now, industry people talk about topics ranging from the general hospitality to sustainable lifestyles,” he said.

“With these people, we continuously share reviews on certain beans from certain farms and the results of different roasting processes, among other things so that everyone can be one step closer to making coffee work as their career.” 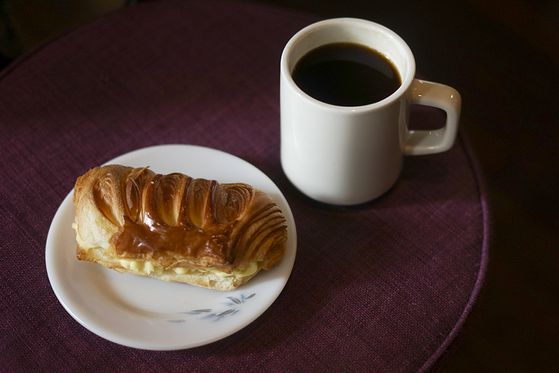 
Fritz Coffee has taken a step even further by experimenting with collaborations with other food and beverage brands to show how versatile the taste and smell of coffee can be.

Magpie, a widely known craft beer brand in Korea, has been making coffee-flavored beer since 2017. Named First Train, the Baltic Porter is brewed by the beer experts with selected beans roasted by Fritz Coffee.

The brand has also collaborated with Sticky Ricky’s ice cream shop to make a coffee-flavored dessert, taking single-origin beans and incorporating them into the a creamy, cold treat.

“Even the result from the very same coffee bean can be so diverse,” said Kim. “Even if I brew what I think is the perfect cup of coffee, the bean's journey is not complete unless the customer also thinks it is perfect."


Executives
Kim Byung-ki and five others

Ediya Coffee to open store in Guam in December