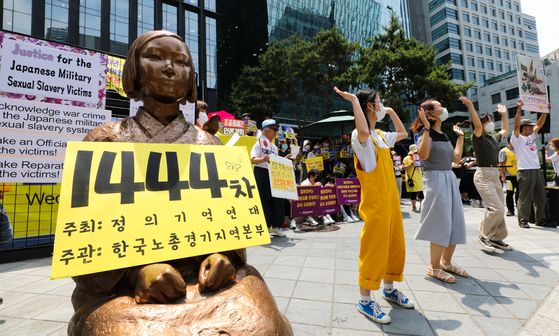 Supporters of comfort women victims stage the 1,444th Wednesday rally near the Japanese Embassy in central Seoul to express their support for the Korean Council for Justice and Remembrance for the Military Sexual Slavery by Japan and to demand an official apology to the victims from the Japanese government. [NEWS1]


As controversy surrounds a civic group dedicated to the cause of Japan's wartime sexual slavery victims, the group's murky financial history has prompted calls to strengthen oversight of nongovernmental organizations (NGOs), and require stricter financial transparency from them.

The Korean Council for Justice and Remembrance for the Military Sexual Slavery by Japan, a Seoul-based civic group, has recently been accused of accounting fraud and misusing donations meant for so-called "comfort women" victims.

But the National Tax Service (NTS) has also faced heightened scrutiny over whether its regulations over NGOs are too lax, and whether it is bothering to enforce the requirements it does place on civic groups.

The Korean Council has come under fire after allegations of financial mismanagement emerged last month. Local media subsequently reported it disclosed just one item to the NTS in 2018, listing a single large donation of 474.93 million won ($392,000) as coming from Ahn Jeom-sun, a victim of the Japanese military’s wartime sexual slavery who died in 2018.

The beneficiaries of that money were listed as 9,999 unnamed people. The group's stated purposes for the donation were the welfare of survivors, the weekly Wednesday rallies advocating justice for the comfort women victims and supporting an affiliated museum on the issue.

Local news outlets have also reported that the Korean Council disclosed to the NTS that it used some 33 million won at one pub during an event promoting the cause of the comfort women victims in 2018. Yet news reports have indicated that the money was actually spread out across about 50 different venues.


Many civic groups in Korea were established as nonprofit welfare organizations, which have a legal obligation to disclose the sources and amounts of donations given to them.

By comparison, tax-exempt NGOs in the United States are held to much higher standards, facing requirements to disclose much more of their financial information to tax authorities, including compensation for their top officials.

The JoongAng Ilbo selected a charitable nonprofit organization in the United States, to compare the expectations of that country's tax authority, the Internal Revenue Service (IRS), with the NTS.

World Vision United States, a Christian relief organization, submitted documents to the IRS that listed 253 donations spanning 31 pages in 2018 — the same year the Korean Council reported just one large donation from a deceased comfort woman survivor. With a total of 106 pages detailing the group's revenue and expenses, World Vision also included the names of organizations, addresses, costs and purposes of its donations.

In the case of non-cash grants or assistance by World Vision, the tax-exempted NGO listed the cost of the item and detailed what it was, such as a toy, clothing or cleaning product. The items, for example described, “Girls Club of Los Angeles, toys, $11,890,” or “Santa Maria Children and Family Health Center, cleaning supplies, $5,605.”

Over multiple years, the Korean Council appears to have failed to meet even the comparatively lax disclosure requirements from the NTS. That includes failures to disclose government subsidies it received, as well as describing beneficiaries of donations as being unnamed groups of 99 people, 999 people, or 9,999 people.

The organization, previously known as the Korean Council for the Women Drafted for Military Sexual Slavery by Japan, has not revealed its total revenue or disclosed full expenditures over the years. While many developed countries' tax authorities require that information, the NTS does not.

Korea’s tax authority since 2009 has required nonprofit organizations to publicly disclose their finances in a system modeled on the IRS’s Form 990 for the Return of Organization Exempt From Income Tax.

Another nonprofit in the United States, Save the Children, documented 409 expenses in 2018, listed over 37 pages out of a total of 141 in its tax return documents to the IRS that year.

The United States also requires groups to report compensation of officers, directors, trustees and employees of the organization who earn more than $100,000.

“This can be seen as a part of accountability of nonprofit organizations that receive tax exemption benefits," said Park Doo-jun, a researcher with Guide Star Korea, a group that tracks nonprofit oversight. "That is because the cost of personnel is greatly linked to the operation of civic groups and charity organizations."

For example, Edgar Sandoval, the president of World Vision in 2018, reported a total annual wage of $484,502 in documents filed with the IRS that year. Fifteen other officers who received the highest wages were listed after him. It even disclosed the wages of three former directors.

The NTS, on the other hand, only requires a listing of the board of directors, without wages included. In the case of Yoon Mee-hyang, the longtime former head of the Korean Council, local news outlets reported her estimated assets as totaling over 800 million won in April, when she was elected as a proportional representative of the ruling Democratic Party.

Yoon is facing a range of allegations, including that she transferred donations meant for the Korean Council to her personal bank accounts, and also has been questioned over the source of funding for her daughter’s overseas studies and apartment purchase. Her income while she was president of the Korean Council has never been officially disclosed.

The Korean Council said that it has only held internal audits, as it did not meet the requirements for having an external auditor.

“Some civic groups say that it's difficult to scrape up funds to pay for an auditor, but they have some 2 to 3 billion won in annual revenue, while an external auditor costs only around 3 to 4 million won,” said a local NGO official who asked to remain anonymous.

Local news outlets in 2019 estimated the Korean Council's revenue at 1.36 billion won, including 760 million won in donations. But it still may have been exempted from hiring an external auditor.

Following the Korean Council controversy, there have been growing demands from the public that the NTS strengthen its regulations regarding the management of NGOs.

Lee Chang-min, a business professor at Hanyang University, used the example of GlassPockets, a U.S. initiative for philanthropic transparency.

“The most frightful penalty for civic groups is not receiving donations," Lee said. "The United States has a 'virtuous cycle' structure, where if a group doesn’t receive [a GlassPockets confirmation denoting the transparency of the organization], then people don’t donate.” 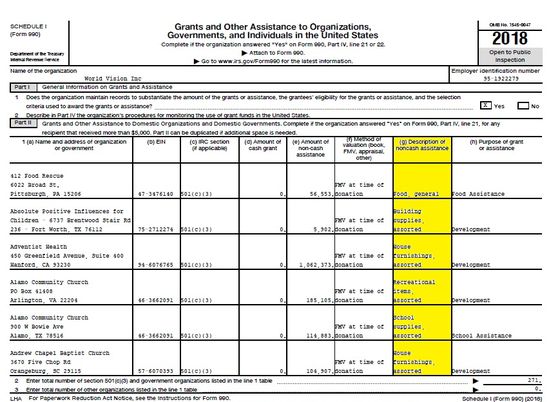 A copy of documents disclosed by World Vision detailing revenue and expenditures to the U.S. Internal Revenue Service (IRS) in 2018. [IRS]