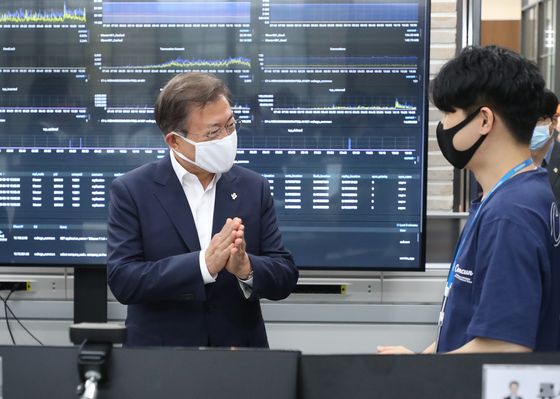 President Moon Jae-in, left, talks with an employee of Douzone, a data platform company, at its office in Chuncheon, Gangwon, on Thursday. [YONHAP]


With reference to the Hoover Dam, President Moon said one of the goals of the so-called Korean New Deal is to build a “data dam” that will maximize the use of data, the foundation of the future digital economy.

“In overcoming the coronavirus crisis and preparing for the post-coronavirus era, the Digital New Deal is an important pillar,” Moon said during his visit to a big data platform operator Douzone based in Chuncheon, Gangwon, on Thursday.

It was his first official appearance at an event promoting the Korean New Deal.The Blue House said it was to show President Moon and his government’s strong determination to lead the post-coronavirus era by vitalizing the data and artificial intelligence economy.

He said the so-called data dam is essential in creating the foundations of the digital economy.

Moon said although the New Deal was adopted by U.S. President Franklin D. Roosevelt to overcome the Great Depression, it has contributed more than its purpose.

He stressed that the Hoover Dam, which is the symbolic project of the New Deal, not only created jobs in the process of the construction but also resulted in the emergence of new industries that utilized the reserved water, and this also created other job opportunities.

“And as it became a popular tourist destination, hotels and casinos were built, and because of the jobs created during construction, a city was built,” Moon said.

He said today it's difficult to boost the economy with such large-scale civil engineering projects. But through the construction of the “data dam,” he wants to achieve the Hoover Dam effect.

“Data created through public and private networks will be gathered at the data dam, and this data will create information through standardization and agglomeration,” Moon said. “The more the data are utilized, they will create smart artificial intelligence, and through the network of artificial intelligence, existing industrial complexes and plants will innovated by becoming smart, and various innovative industries will be created and innovative services such as 'untact' [non-human-to-human] services will emerge.”

He stressed that in the process of collecting and processing data, jobs will be created.

The Digital New Deal "will save Korea’s economy and will serve as the foundation that will put Korea as a leading economy in the post-coronavirus era,” Moon said. “If we succeed in this Digital New Deal, we will succeed in being ahead of other countries in the digital economy,” Moon added.

The president said in order for the project to work, protection of private information is vital in the process of opening up data. He added that the government will work to help those who may lose their jobs in existing industries.

“The digital gap will widen further,” Moon said. “It is our biggest goal to creating an inclusive digital economy that reduces these differences.”

President Moon in late April proclaimed the Korean New Deal during the emergency economic council meeting he was heading as the coronavirus pandemic was harming the economy and leading to job losses.

The government also plans to invest 12.9 trillion won in the so-called Green New Deal, which it hopes will lead to the creation of 133,000 jobs.

The company has 1,527 employees, of which 800 work at the company’s branch office in Gangwon. Half of the employees are local residents.