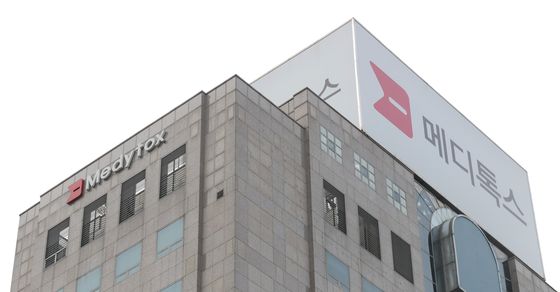 The Ministry of Food and Drug Safety removed Medytox's sales license for its main botulinum toxin, or Botox products on Thursday.

Three products were subject to the blow: 50-unit, 100-unit and 150-unit dosages under the company’s Meditoxin lineup. Domestic bestsellers in Korea’s botulinum toxin, or Botox, market, the three products were responsible for 42.1 percent of Medytox’s sales revenue last year.

The decision comes two months after the drug authority suspended the production, sale and use of the three dosage types.

The company is accused of violating domestic pharmaceutical law by using an unapproved ingredient in the manufacturing process and fabricating efficacy and safety test results between 2012 and 2015. The misreported data was used to obtain government approvals ensuring product quality.

The removal of Medytox's license will come into effect on June 25. The drug safety authority said Thursday that it advised the manufacturer to collect and discard the products for which licenses were canceled. Medical institutions that have them in stock were asked to participate in the recall as well. Medytox will be able to start the procedures to reattain its licenses after a year has passed.

“We plan to apply for a provisional injunction and cancellation of disposal on the Ministry of Food and Drug Safety’s decision,” Medytox said in a regulatory filing Thursday, after the ministry's decision was announced. Since last year, the company has been arguing that canceling its licenses would be a harsh decision as the products in question did not have issues in safety or efficacy.

Best known under Allergan’s brand name Botox, botulinum toxin is one of the most widely used ingredients in plastic surgery for its effect of reducing wrinkles by paralyzing muscles. Domestically launched in 2006, Meditoxin was the first approved botulinum toxin in Korea and is reportedly sold in 60 countries.

Medytox was regarded a leader among domestic Botox producers, with Hugel and Daewoong Pharmaceutical at second and third place respectively. The three Meditoxin dosages in question were Medytox’s bestsellers in high-demand for beauty-purpose plastic surgery. A larger, 200-unit dosage Meditoxin did not have its license canceled.

The drug safety authority also ordered a 174.6-million-won fine as an alternative to a three-month suspension of production and sales of Innotox, another botulinum toxin product at the company which it also believes to have fabricated test results.

Possibilities that the Medytox products in question would cause safety risks were low, the ministry added, based on past usage cases, expert advice and the fact that botulinum dissolves inside the body after a certain period of time.

The company has been grappling with the accusation since last year when a whistleblower first accused Medytox of fabricating efficacy test results for Meditoxin. The company and its top executives have been grappling with prosecutors’ investigations ever since. In April, the prosecution filed a related criminal complaint against Medytox CEO Jung Hyun-ho.

The license cancellation will unquestionably pose risks for the company due to its heavy sales reliance on the three Meditoxin products. The ministry’s decision could also deal a blow to its brand image — a critical loss for a medical company and a likely obstacle to sales of Medytox’s other Botox and filler products.

“The fate of Medytox’s future performance relies on how the 200-unit Meditoxin, Innotox and Coretox will be able to fill the sales void created by the three canceled products,” said Jin Heung-guk, an analyst at Korea Investment & Securities. “In the long term, the company will have to focus on restoring credibility and obtaining sales permits in major foreign markets like China and the United States.”

It also remains to be seen how the drug safety administration’s decision will affect the company’s ongoing dispute with Daewoong in the U.S. International Trade Commission (ITC). Medytox had filed a complaint with the ITC last year, accusing its competitor of stealing its botulinum toxin strain. The U.S. ITC is expected to come up with a preliminary ruling in July.