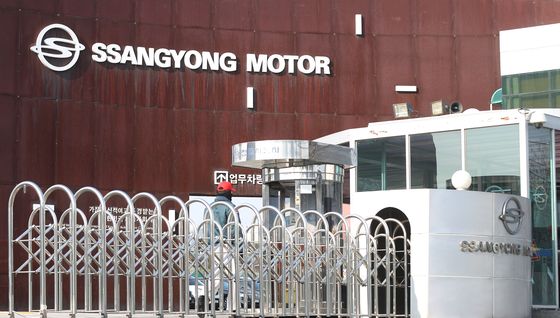 
Korea Development Bank (KDB) has refused to throw SsangYong Motor the lifeline it desperately needs, pushing the cash-strapped company one step closer to its second restructuring in just over a decade.

In 2009, the automaker was placed under court ordered receivership and had to layoff nearly 2,000 employees.

The state-run lender said Wednesday that SsangYong Motor is not eligible to receive any of the 40 trillion won ($33 million) special fund created by the government to help companies hit by the coronavirus. It was considered SsangYong Motor’s last hope as it faces an impossible cash crunch.

Lee Dong-gull, chairman of KDB, said that the automaker was already in deep trouble before the outbreak, so it is ineligible to apply for the support.

“It would be wrong to think that [SsangYong Motor] can be revived if KDB just injects money,” Lee said during an online press conference Wednesday. “The management and workers of SsangYong Motor have to be more frank and serious about survival. From my perspective, it doesn't seem so. They really have to put down everything and think about what should be done.”

Lee said the bank would extend repayment of a 90 billion loan due in July on the condition that the automaker’s short-term loans from foreign banks are also extended.

According to SsangYong’s most recent quarterly report, it has nearly 400 billion won in loans that are due within a year, including the imminent 90 billion won from the KDB.

Of that 400 billion won, 276 billion won of it is borrowed from foreign lenders, including JP Morgan, BNP Paribas and Bank of America, and their due dates starting rolling in from the end of June. SsangYong Motor’s Indian parent company Mahindra & Mahindra acted as guarantor for most of these borrowings.

KDB is requesting a more aggressive business turnaround plan from the beleaguered automaker, such as a wage cut or even layoffs.

SsangYong Motor has been selling off non-core assets since the beginning of the year, including a logistics center in Busan and an after-sales service center in Seoul. From the two sales, SsangYong secured some 200 billion won. It is also working to roll out new car models.

SsangYong in May released a 1.2-liter gasoline engine-equipped Tivoli SUV in the European market. SsangYong Motor plans to launch two models — G4 Rexton and Tivoli Air — in Korea in the latter part of the year.

The automaker has been recording losses for 13th consecutive quarters, but SsangYong Motor says wage cuts or layoffs are not plausible options for now.

"The management and the labor union last year had already agreed to a certain amount of wage cuts for 2020, and it is going to be maintained throughout the year without additional cuts," said a spokesman for SsangYong Motor on Thursday. "We don't know how things will turn out for next year's wage negotiations, which will start in April at the earliest."

According to the automaker, a cut in wages and welfare benefit agreed to last year were expected to save the company some 100 billion won this year.

"I think SsangYong Motor is trying to go in line with the current administration's policy stance of 'maximizing employment,' so that perhaps in the end the government could step forward as its white knight," said one industry source requesting for anonymity. "And in order to even hope for that scenario, a reduction of employee numbers would be the last thing they want to do."

Mahindra & Mahindra last week during a conference call said it is looking for new investors for SsangYong, hinting that it is seeking to unload its ownership in the loss-making automaker. The Mumbai-based company acquired 75 percent of SsangYong in 2011 for 520 billion won and later invested additional 130 billion won by purchasing newly issued shares

As of June 18, its ownership stake is worth 240 billion won.

“KDB doesn’t have a reason to unconditionally fund SsangYong like it did with GM Korea in 2018 when it provided 800 billion won worth of state funds when it was near exiting Korea,” said Lee Ho-geun, automotive engineering professor at Daeduk University. “At the time, KDB was GM Korea’s second-biggest shareholder while for SsangYong it is just a creditor.”

“Finding a new owner is becoming one of the most plausible options, but without a tangible business plan like KDB mentioned, it won’t be easy to find a new owner, especially at a hard time like this.”