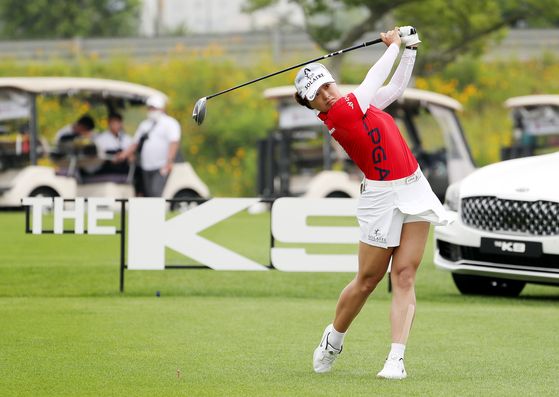 World No. 1 Ko Jin-young watches her shot during the first round of the 34th Kia Motors Korea Women's Open at Bear's Best CheongNa Golf Club in Incheon on Thursday. [YONHAP]

INCHEON – World No. 1 Ko Jin-young proved her worth, taking the sole lead after the first round of the 34th Kia Motors Korea Women’s Open at Bear’s Best CheongNa Golf Club in Incheon on Thursday.

Playing at the Tour’s longest total yardage of 6,929, Ko was in the last group to finish her round on Thursday. With her impressive accuracy on display, Ko’s round consisted of seven birdies to shoot a bogey-free round of seven under par, 65.

As Ko was playing in the final group of the day, she started her round knowing the leading score, held by Lee Min-young at six under par. Ko picked up her first birdie of the day on the par-5 second. Then, she quickly climbed her way up by making three straight birdies from the par-4 fifth to par-3 seventh.

Having finished her first nine holes at four under par, Ko continued her streak in the back nine. She started by making a birdie on the par-5 10th and another on the par-4 13th, allowed her to tie for the lead. While Ko was tied for the lead with fellow LPGA player Ryu So-yeon and Lee, it came down to the par-4 16th.

Hitting another accurate iron shot from the par-4 16th fairway, Ko rolled in another birdie putt to finally take the sole lead. By making pars on the next two holes, Ko also finished her round without a bogey.

“Overall today, I hit a lot of fairways and greens so I didn’t really have much opportunity to chip around the green,” Ko said. “So I had a lot of birdie opportunities and by successfully making those, I think it led me to a good result. Overall, my shots were good.”

Followed by Ko, Ryu and Lee are tied for second at six under par, 66. Ryu’s round consisted of six birdies and no bogey. This is Ryu’s first outing in Korea this year as she plays on the LPGA Tour.

While Ryu was the second player to finish her round at six under par, Lee was actually the first player to take the lead as she played in the morning. Lee’s round consisted of eight birdies and two bogeys. Lee also isn’t a regular when it comes to Korea as she plays on the JLPGA Tour. Lee no longer has her KLPGA Tour status card, but was able to compete this weekend as one of five players ranked inside top-200 in the world ranking.

Defending champion Lee Da-yeon didn’t have the best start as she shot one-over par, 73, to be tied for 70th. Lee’s group also received quite some attention as she played with the 2018 champion Oh Ji-hyun and the 2017 champion Kim Ji-hyun. Oh had the best round among the three as she also shot four under par, 68, to be tied for fourth, while Kim shot a round of even par, 72, to be tied for 45th.

As the KLPGA Tour restarted its season with a major tournament — the 42nd KLPGA Championship on May 14 — this is the second major of the season. This tournament is co-hosted by Kia Motors and the Korea Golf Association, and has a total tournament purse of 1 billion won ($827,000). Of the 1 billion won, the champion will take home 250 million won.

This four-day, 72-hole tournament, features a total of 144 players and after the first two rounds, the top 60 players or the players tied for 60th will play through the weekend.

Playing another week of golf at empty golf courses came as a huge blow to the fans. Just like the KBO, the Kia Motors Korea Women’s Open also hosted online events to keep fans interested.

This week’s national title is also receiving quite some attention around the world as the rounds are being broadcast live in different countries around the world like Japan, Canada, Australia, China and many more.

The second round of the tournament will continue Friday, as the players tee off on the first and the 10th tee, starting at 6:30 a.m.