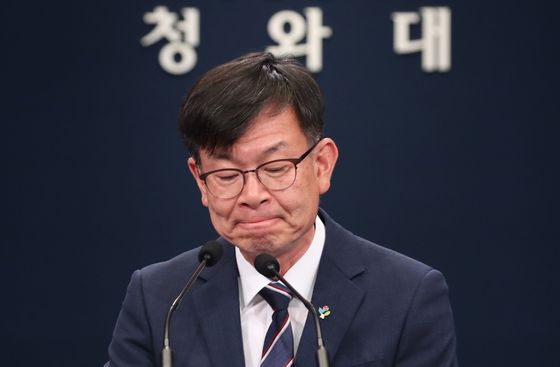 
The Blue House again urged lawmakers to pass the third supplementary budget on Sunday, warning that companies, especially small businesses, are on the verge of bankruptcy as the impact from the coronavirus pandemic grows.

According to the Blue House on Sunday, President Moon requested that the 35.3 trillion won ($29.2 billion) supplementary budget, which is an all-time record, be approved before the end of this month.

“President Moon is concerned about the growing pain the public faces as the supplementary budget is being delayed,” said Blue House spokesman Kang Min-seok said Sunday.

The Blue House spokesman said Moon strongly requested the approval of the budget so that the 1.14 million people working in special jobs with no social security guarantees including deliverymen and insurance sales people can receive a 1.5 million won allowance; the 490,000 people that have lost their jobs can receive their unemployment paychecks; and the 580,000 people working at struggling companies do not lose their jobs and keep 70 percent of their paycheck.

The budget also allows for a 1.8-million-won monthly paycheck for 550,000 people that will be working in jobs to be created under the Korea New Deal.

“During the five emergency economic council meetings held by President Moon between March and April, 255 trillion won worth of economic stabilization measures were announced,” said Kim Sang-jo, the president’s policy chief. “The sixth meeting, when the third supplementary budget was announced, also included the 5-trillion-won Korean New Deal, which is our office’s top priority.”

He stressed that the government has achieved substantial success in overcoming the coronavirus pandemic through several measures including ensuring the liquidity of financial companies.

“However, I can’t stress enough the importance of the quick execution of the [third] supplementary budget as some companies and those in the vulnerable classes continues to struggle,” Kim added.

“For example, companies with low credit scores are in the most desperate need of finance from state-owned financial companies,” Kim said.

Last week a second-tier part supplier of Hyundai Motor, Myungbo Industrial located in Gyeongju, North Gyeongsang, announced that it was shutting its doors after failing to get an extension on its loans.

The second-tier parts supplier, which supplied fuse boxes and backseat covers for several Hyundai Motor vehicles including the Palisade, Santa Fe, Tucson and Nero, was said to owe debts amounting to 6.8 billion won.

The failure of the parts supplier is expected to affect the production of the relevant Hyundai vehicles.


Hyundai Motor has been repeatedly suspending and reopening some of its production plants as overseas demand has dropped amid the global pandemic.

In May the overseas sales of five Korean automakers compared to the same period a year ago halved 47.8 percent, a stark contrast to domestic sales, which rose 9.4 percent.

“In an international political and economic environment which is full of uncertainty, it’s hard to predict what today’s measures will result in tomorrow,” Kim said. “One thing I can say for certain is the worst [thing to do] is delay decisions that should be made today.”

Kim, however, evaluated the government’s response to Japan’s export control against Korea and the pandemic as positive.

"To speak honestly, the government doesn’t have a perfect solution and it is impossible to have measures that are perfectly prepared for unexpected [events] like Japan’s export regulations and the Covid-19 crisis,” he added.

“While all policies may not satisfy everyone and some need meticulous changes, the Moon administration has defended [Korea] well, especially against Japan’s export restrictions and Covid-19."