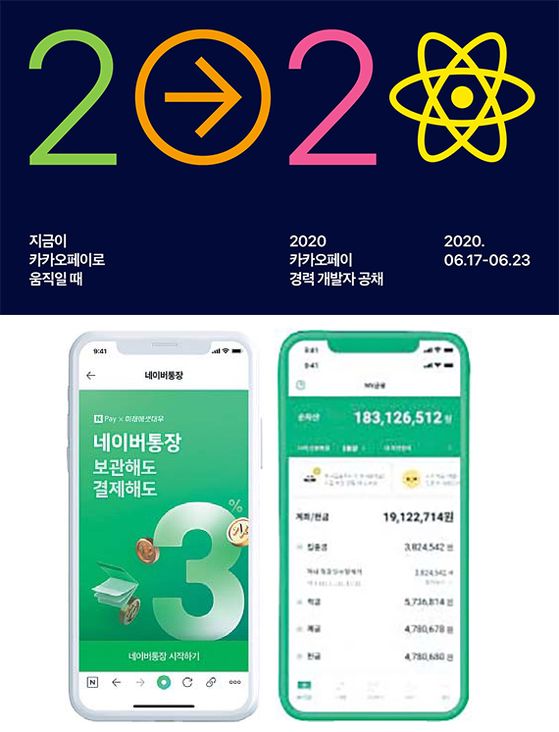 
Fintech companies such as Kakao Pay, Toss and Naver Financial are becoming the next hottest places to work, gobbling up the top talent from major Korean banks and even Silicon Valley.

Professionals in the industry say there's really nothing to lose, considering the competitive salaries, hefty stock options and what many believe to be phenomenal growth potential in the financial tech sector.

Previously, Kakao had been in talks with Samsung Fire & Marine Insurance for a joint venture. The proposal eventually fell through, but the IT giant still plans to offer its own insurance policies.

Kakao Pay’s recruitment notice created some buzz among office workers online. People have been sharing their estimates of the IT giant’s salary, benefits and office culture through anonymous online forums.

Naver Financial, the financial arm of the portal giant Naver, put up a notice last month that it will hire around 50 experienced workers — reportedly resulting in a deluge of resumes sent by top talent not only from commercial banks but from top conglomerates in the country.

Officials say that the vertical decision-making model of companies like Naver might have added appeal to young developers.

“A lot of talented developers we scout from start-ups have a hard time getting used to the strict, conservative and hierarchical decision-making process of the finance industry,” said a high-ranking official from the finance industry, who wished to remain anonymous to answer frankly. “It makes sense that developers would seek out companies where the leadership allows developers to freely try out their ideas.”

Such vacuuming of talent is not only for tech giants like Naver and Kakao. Financial tech start-ups like Banksalad are scouting IT professionals from Silicon Valley, promising rosy visions for the future.

Start-up Rainist, the operator of the asset management app Banksalad said it scouted four developers from the headquarters of international tech giants like Airbnb and Facebook. While the four people were offered juicy deals from other big players, they decided to stay with Banksalad, drawn in by the proactive working environment of a start-up.

“Many of the new developers were attracted to our data-driven business model and autonomous working environment,” said an official from the company.

The fintech industry is highly attractive, especially to millennials in their 20s and 30s, due to its massive growth potential and relatively liberal working environment. As more tech companies expand into the finance, banking and insurance businesses, the financial industry is seeing more of its talent knocking on the doors of tech companies.

The exceptionally competitive benefits these companies offer is another factor. Viva Republica, the operator of Toss, took the internet by storm for offering close to double the salary from their previous jobs and some 100 million won in stock options for experienced hires.

“There’s really no reason to reject a job offer from a company that has less hierarchy and better pay,” said an official from the fintech industry.

The fintech industry has also caught the eyes of fresh graduates. According to a survey from job portal Incruit, Kakao Bank was No. 1 among 1,045 university students as the most desirable bank to work at. Students pointed out Kakao Bank’s “growth potential” and “work and life balance” as the two most attractive aspects of the company.

Traditional banks are on red alert to retain talent.

“IT specialists will become more valuable as time passes for the finance industry. We are worried that the fintech industry will vacuum up all the best talent,” said an official from one commercial bank. “The finance industry needs to change from its rigid working culture into a more flexible one to prepare for the future."