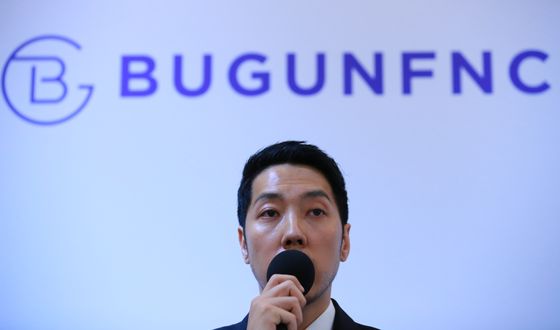 Park Jun-sung Bugun FNC CEO and the husband of the Instagram influencer Im Ji-hyun, makes a public apology on May 20 last year at the company's headquarters in Seoul after several controversies, related to quality control, customers response and deleting negative reviews, became the focus of attention. The company is accused by the FTC of deceiving consumers by only exposing positive reviews and manipulating the "best items" list. [YONHAP]

Imvely, a fashion and beauty products company that went from social media favorite to a target of angry internet mobs almost overnight last year, has been rocked once again.

The authorities have found that it manipulated online reviews.

Imvely was one of the seven social media-based online shopping malls fined by the Fair Trade Commission for unfair business practices, according to a statement Sunday. A total of 33 million won ($27,400) of fines were meted out, with Imvely being ordered to pay 6.5 million.

In addition to hiding negative reviews, the company is also accused of manipulating its "best items" rankings. While claiming that the rankings were based on objective standards, it turned out some of the products were on the lists due to excess inventories.

Last spring, Imvely made headlines after it was found that the pumpkin juice sold on its site was moldy. The company dug itself deeper by only offering to replace the product and refusing to make refunds. This resulted in a torrent of claims online about the company's products and its refusal to apologize.

The company also was found to have deleted negative comments.

Park Jun-sung, CEO of Imvely parent company Bugun FNC, made a public apology, and the company's fortunes, which were once considered bright as it leveraged internet fame to real business, dimmed.

Imvely is the nickname of Im Ji-hyun, model turned entrepreneur and social media influencer. As of Sunday, Im had 690,000 followers. This is a drop from a year ago, when she had more than 820,000. Imvely’s official website still has over 1 million followers.

Other social-media-based online shopping malls were found to have committed similarly deceptive practices. Haneul Haneul, a underwear company, hid negative reviews and shortened the deadline for returns. Pighip, an online fashion mall, was found to have done much the same.

The FTC in a statement said it expects the fines will discourage shopping malls that use influencers from violating the Electronic Transaction Acts and raise awareness.

The government has been increasing its crackdown on violations by businesses using social media platforms and YouTube. The National Tax Service on Thursday announced that it targeted those making income through such new platforms, which have been growing rapidly.

Citing an April 19, 2019 survey, the NTS said 55.7 percent of social media users in Korea have bought products via these platforms. A study released in May 2019 found that the single-person media market grew from 3.8 trillion won in 2018 to 8 trillion won.