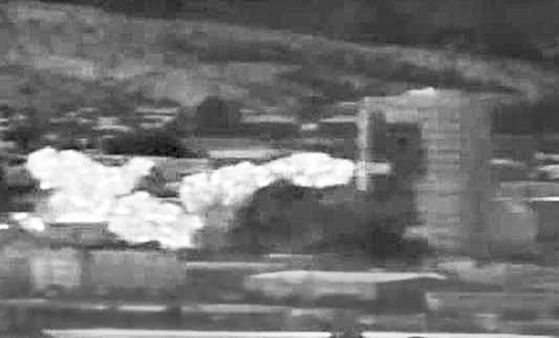 The inter-Korean liaison office in Kaesong is demolished by North Korea on June 16 in a gesture of opposition to the dispatch of propaganda leaflets from South Korea and President Moon Jae-in’s North Korea policy. [YONHAP]

BY LEE DONG-HYUN
The author is the deputy director of the industrial 1 team at the JoongAng Ilbo.

When I first visited Kaesong, North Korea, 17 years ago, what surprised me the most was the bare, red-soiled Songak Mountain with not a single tree. Deep marks were made on the unpaved road due to the torrential rain on the previous day.

Former Prime Minister Lee Nak-yon, a first-time lawmaker at the time and former journalist, was accompanied by reporters covering small and mid-sized businesses. He kept the atmosphere pleasant with gentle humor. While sharing jokes, Lee suddenly looked far into the mountain and looked like he was going to cry. “The red-soiled mountain without a single tree is sad,” he lamented.

I turned around and found a camera from a broadcasting station beside him. After the cameraman left, Lee made jokes with the reporters as if nothing had happened. The footage of Lee was shown on prime time news that evening.

Reporters who accompanied Lee assumed that Mt. Songak had no trees because of the Arduous March in the 1990s. There was no other explanation for the bare mountain unless people had to live off tree bark and roots.

When a luncheon was held at the Janamsan Guesthouse, I was served chicken soup with no spices. The chicken was old and very tough with little meat. I drank a glass of strong blueberry wine with the lunch and toured Seonjuk Bridge and Gaesong Museum before returning to Seoul.

I still have bits and pieces of memories from the Kaesong Industrial Complex construction ceremony on June 30, 2003. All I remember are Lee Nak-yon’s gentle humor, that chicken soup — and how I had a hard time finding the trace of bloodshed by Jeong Mong-ju on the Seonjuk Bridge centuries ago. Seventeen years have since passed.

North Korea demolished the inter-Korean liaison office at the Kaesong Industrial Complex. The inter-Korea relations that seemed to bring “spring” soon two years ago have entered the Ice Age. The hopes of the small and medium-sized business owners who devoted their youth and wealth to the joint industrial park are about to vanish.

At the construction ceremony 17 years ago, then Hyundai Asan president Kim Un-gyu said, “The torrential rain stopped just in time for the ceremony, as if the sky is helping the Kaesong Industrial Complex.” God helps those who help themselves, but I cannot predict when the rain will stop.

When will the rain stop? (KOR)