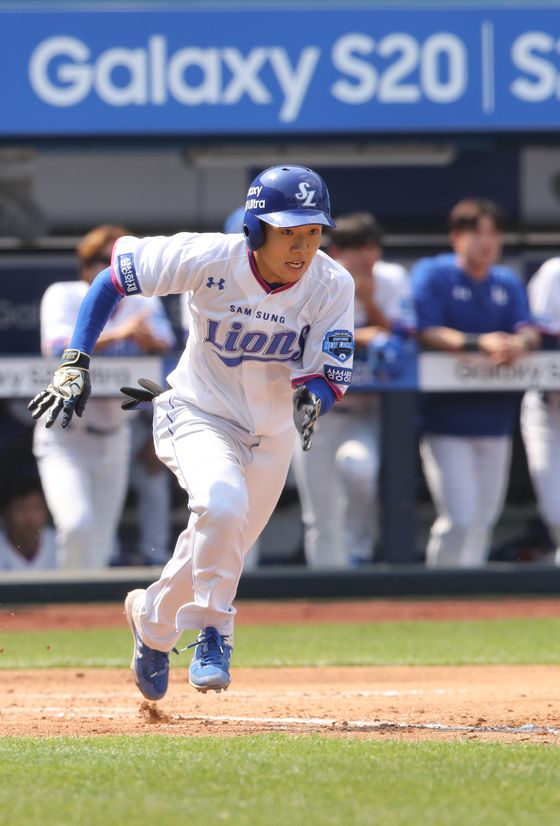 Kim Ji-chan of the Samsung Lions runs to the first base during a practice game against the Hanwha Eagles at Daegu Samsung Lions Park on April 25. [ILGAN SPORTS]

Samsung Lions’ rookie infielder Kim Ji-chan may be short in stature but he’s strong enough on the field to compete against the KBO’s best.

Born on March 8, 2001, Kim was drafted by the Lions during the rookie draft last year. Back at Raon High School in Gyeonggi, Kim was known for his stable defense and speed alongside an impressive batting average of 0.476. In his third grade in high school, Kim managed to steal 28 bases.

His performance was good enough to earn him a spot on Korea’s U-18 Baseball Team, going on to win a bronze at the 2019 U-18 Baseball World Cup in Gijang, South Gyeongsang. He was assigned as second baseman and the second batter in the lineup and, following the tournament, he won the batting, defense and stolen bases title.

Despite his notable performance in high school, Kim was still drafted a lot earlier than expected. When considering a potential player, scouts are looking at not just their current skill level, but also the players’ potential and physical condition.

Due to this, when the Lions called Kim’s name in the second round it came as quite a surprise, as he only stands at 1.63 meters (5 feet 3 inches) and weighs 64 kilograms (141 pounds).

Kim Sun-bin of the Kia Tigers, who was the shortest player in the KBO before Kim Ji-chan joined, was drafted in the sixth round back when he was in high school.

Despite concerns, Kim has proven he's more than capable of playing in the KBO. Not only was Kim included in the Lions’ opening day entry, he’s appeared in 35 of the Lions’ 41 games as of Saturday.

He quickly proved his worth as an all-around player as he has appeared as a pinch-runner, pinch-hitter, defensive player and more. Even in terms of his defensive position, he’s been covering second and third base, as well as shortstop and center fielder.

As of Saturday’s game, Kim has a 0.280 batting average with four RBIs and three stolen bases.

Even Kim is surprised at how well things are going — back in February he wasn't even included on the Lions spring training roster. .

“Whether I’m in the Futures League or in the KBO, I just told myself to work hard,” Kim said. “Once I got the opportunity, I worked harder and jumped right into it.”

Once Kim joined the KBO, he was asked a lot of questions regarding his height. Rather than considering that as a disadvantage, Kim never really thought his height was an issue.

“I never cared about my height while playing baseball,” Kim said. “If there are players who are taller than me, then I just have to play better than them. Rather than considering my short height as my weakness, I can use that to my advantage.”

Kim figured out a way to use his short height as an advantage: bunting.

“Since high school, I have trained a lot to be specialized in bunting,” Kim said.

His hard work and solid performance has also won over the league’s veteran players. Back on June 16, during the Lions’ game against the Doosan Bears, Kim appeared in the batters box as a pinch hitter and hit the winner to help the Lions’ Oh Seung-hwan pick up his career 400 saves.

“That was something that I never expected,” Kim said. “It feels great to be able to help [the older players].”

His performance has also impressed the veteran players on other teams. Kim received a bat from NC Dinos’ Park Sok-min and Lotte Giants' Lee Dae-ho was caught on TV smiling at Kim.

“A lot of the older players have been encouraging me saying that I’ll be better in baseball and to work hard,” Kim said. “They also advise me to do a lot of weight training. It’s great.”

Like everyone else in the KBO, Kim has been disappointed not to play in front of the fans. Due to the coronavirus, the KBO has started its season behind closed doors and young players like Kim are yet to feel the excitement of playing in front of a big league crowd.

“My dream is to become a player loved by the fans,” Kim said. “I imagine playing at a sellout crowd at Samsung Lions Park. When there's a big crowd, I get more energetic, rather than nervous. I really hope to play in front of the fans soon.”

Among the rookies this year, Kim stands out the most among the batters. In terms of the rookie race, he is at a disadvantage once again as he is competing against starting pitchers like the KT Wiz’s So Hyeong-jun and the LG Twins’ Lee Min-ho

“I don’t really care about the Rookie of the Year award,” Kim said. “I like it better when our team wins more.”