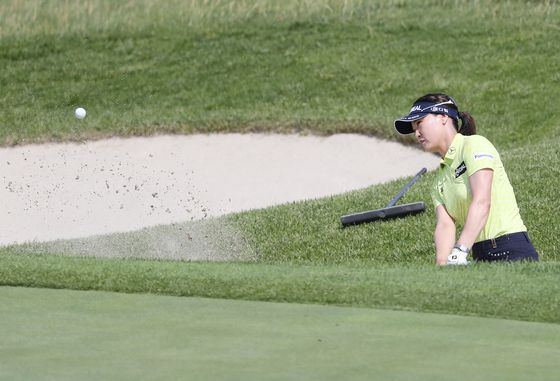 Ryu So-yeon hits her bunker shot on the 18th hole during the final round of the 34th KIA Motors Korea Women's Open at the Bear's Best CheongNa Golf Club in Incheon on Sunday. [YONHAP]


INCHEON — Ryu So-yeon made a decisive return to the KLPGA Tour over the weekend, picking up the win at the 34th Kia Motors Korea Women's Open, her first tournament since before the outbreak of coronavirus.

By shooting a four-day total of 12 under-par, 276, Ryu was named winner of the Women’s Open at the Bear's Best CheongNa Golf Club in Incheon on Sunday. Ryu, who was the overnight leader with a one-shot lead, successfully maintained the top spot by shooting a final round of even par, 72, to retain her lead. Ryu’s round included a birdie and a bogey, good enough to win her the national title. 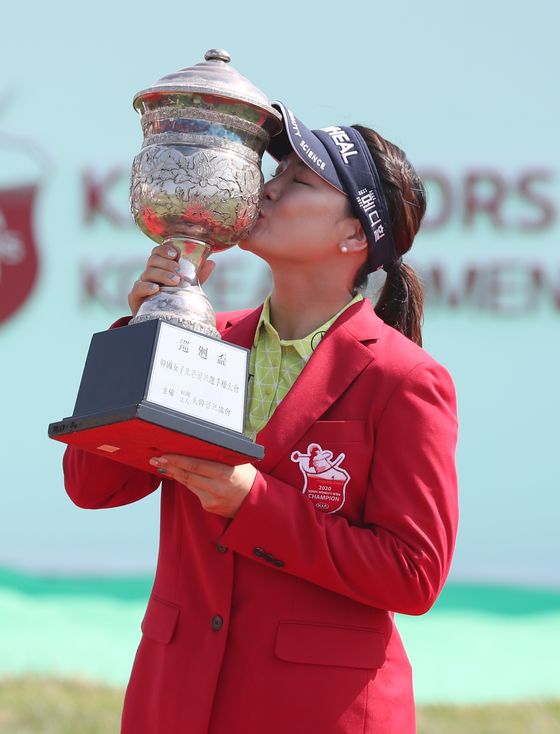 Ryu So-yeon kisses the trophy after winning the tournament. [YONHAP]


Consistency was key to Ryu's game — she started her first five holes with pars. She then made her first birdie of the day on the par-5 sixth. However, her two-shot lead didn’t last long as she made a bogey on the par-4 ninth, missing a short par putt.

This slip opened up an opportunity for Kim Hyo-joo, who was closely chasing Ryu by one shot. In the end, Kim failed to overcome that one-shot deficit as both Ryu and Kim made pars in the second half of the nine holes.

On the very last hole, the par-4 18th, both Kim and Ryu missed the green, as Kim hit it short while Ryu ended up in the bunker. Although Ryu’s bunker shot seemed like a tough one, both players once again successfully made an up and down for a par, allowing Ryu to become the winner of this year’s national title.

“Since it’s been a while since I competed in a tournament, I did want to win,” Ryu said. “But rather than being greedy, I just told myself to do my job. I was glad that I didn’t lose my focus until the end.”

While there have been a number of LPGA Tour players competing on KLPGA while the LPGA has been postponed, this was Ryu's first outing since the coronavirus outbreak. Ryu says that she is going to donate all the prize money.

“I thought of donating since last night,” Ryu said. “Before the awards ceremony, I called my mom. I told her that I’m going to make the announcement so don’t get too surprised. She was just as happy I was. Since this tournament has a lot of meaning to me and I thought that I may be able to play better if I had a positive goal, I came up with it last night.” 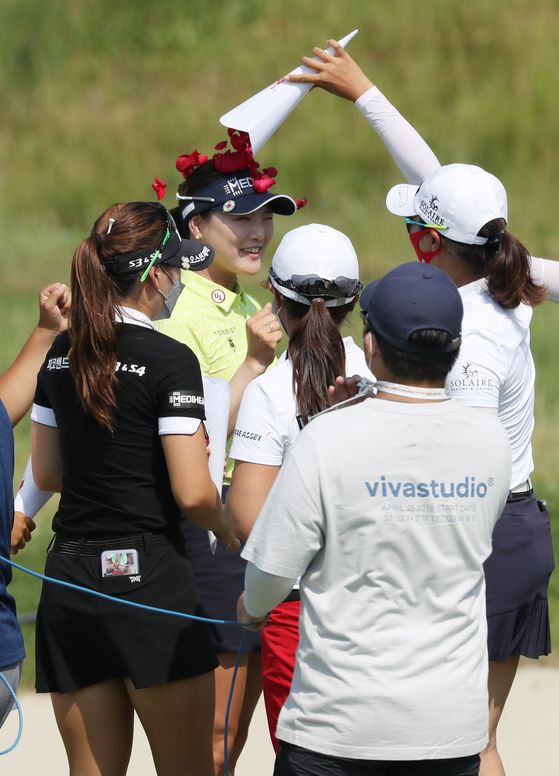 Ryu So-yeon, in yellow, is congratulated by other golfers after winning the tournament. [YONHAP]


Ryu hasn't been completely inactive this year — back in February she competed in two LPGA Tour events in Australia.

While Ryu is an active player on the LPGA Tour every season, this victory has been a long time coming. Ryu's last victory on the LPGA Tour was at the Meijer LPGA Classic in June 2018. On the KLPGA Tour, this is the first time since August 2015, at the High 1 Resort Ladies Open, that Ryu has picked up a win.

“Now that I’ve [finally] won this tournament, I think this will be a great memory,” Ryu said. “So I think this tournament has a lot of meaning for me. And I think humans really are greedy creatures because after I won this, I started to think that I want to win the British Open. Hopefully I can win that one too.”

Ryu is already a well-known figure on the KLPGA Tour and the LPGA Tour. Just like a number of Korean golfers, Ryu started her career on the KLPGA Tour. Even before the KLPGA Tour, she stood out as an amateur as she won gold at the 2006 Doha Asian Games in women’s individual and women’s team.

Once she joined the KLPGA Tour, she continued her streak by picking up a total of 11 titles. But what really made her a household name was the 2011 U.S. Women’s Open. At the time, Ryu defeated Sea Hee-kyung in a sudden-death playoff to win the major title and join the LPGA Tour.

Since she officially joined the LPGA Tour as a rookie in 2012, Ryu has won six tournaments, good enough to be ranked No.18 in the Rolex women’s world ranking. Her victory this weekend was also quite a surprise as Ryu competed without her usual caddie.

While World No. 6 Kim Sei-young and No. 1 Ko Jin-young were able to have their caddies for the tournament, Ryu's friend stepped in as her caddie. The victory allowed Ryu to take home another prize, a full-time KLPGA Tour status card. Although Ryu plays on the LPGA Tour, she now has a KLPGA Tour card as well.

Aside from Ryu, LPGA golfers were well represented on the leaderboard, with Kim Hyo-joo finishing runner-up at 11 under par, 277, Kim Sei-young tied for fourth at nine under par, 279, and Ko at sixth with a four-day total of six under par, 282. Lee Jeong-eun finished tied for ninth at four under par, 285.

The Kia Motors Korea Women’s Open may have been held behind closed doors, but plenty of fans still got a chance to watch the action as it was televised in nine countries outside of Korea.


The KLPGA Tour will continue its season at the BC Card Hankyung Ladies Cup 2020 at Fourtune Hills in Pocheon, Gyeonggi, starting from June 25 to June 28.