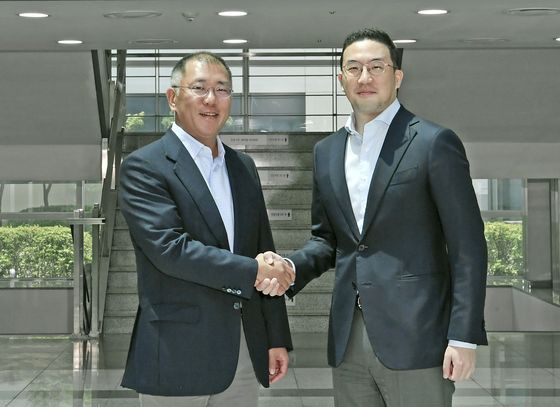 It was the first time Chung and Koo, leaders of Korea’s No. 2 and No. 4 conglomerates by asset size, held a one-on-one meeting.

Chung visited LG Chem’s plant in Ochang, a part of Cheongju, with Albert Biermann, president of the auto giant's research and development (R&D) division, and other executives to check out production lines and the development of LG Chem's long-life batteries, lithium-ion batteries and solid-state batteries.

LG Chem's Ochang plant was built in 2011 and handles approximately 10 percent of the company's global battery production. It is considered a strategic manufacturing hub, being less than an hour's drive from its Daejeon R&D center.

Chung and Koo are known to have talked about combining forces on future EV battery businesses, according to both companies.

It has become vital for battery manufacturers to secure a stable customer that will continue to churn out EV models.

Hyundai Motor and its smaller affiliate Kia Motors sold a total of 24,116 fully electric vehicles in the first quarter of this year, making it the world’s fourth biggest EV seller, according to market data provider EV Sales.

Tesla came in first on that list, followed by the Renault-Nissan Alliance and the Volkswagen Group.

Hyundai Motor Group, the world's fifth biggest carmaker by sales, has pledged to introduce a total of 44 eco-friendly models through 2025, 23 of which will be purely electric.

Local battery manufacturers have been scrambling to lock in the carmaker's business.

Last month, Samsung Electronics Vice Chairman Lee Jae-yong invited Chung to Samsung SDI’s plant in Cheonan, South Chungcheong, to give him a tour of the manufacturing lines and brief him on the company’s research and development of solid-state batteries.

Solid-state batteries, which have yet to be commercialized, are considered the most promising technology for EVs, with longer ranges and safer components than lithium-ion batteries.

The meeting between the two tycoons was seen as a sign of a possible partnership between Samsung SDI and Hyundai Motor once the solid-state battery is commercialized.

At the moment, Samsung SDI doesn’t supply its lithium-ion batteries to Hyundai Motor.

SK Innovation is another part of the competitive game.

It was recently selected as a supplier for Hyundai Motor Group’s new E-GMP platform. E-GMP is a platform for fully electric vehicles that will start production in 2022.

LG Chem was also selected as a supplier.

According to market tracker SNE Research, LG Chem was the biggest EV battery supplier this year in the world from January to April, with a 25.5 percent market share, followed by Panasonic and CATL.

Samsung SDI was ranked fifth with a 5.6 percent share, and SK Innovation came in seventh with 4.2 percent.

"Hyundai Motor and Kia Motors are researching technology that can realize the most suitable battery for the world's best EVs," a spokesman for Hyundai Motor said in a release.

"The latest visit was to see the development of high-performance batteries as well as to share thoughts on the direction of future battery development."

Chung is supposed to meet with SK Group Chairman Chey Tae-won in the near future as well, although the exact time hasn't been confirmed.