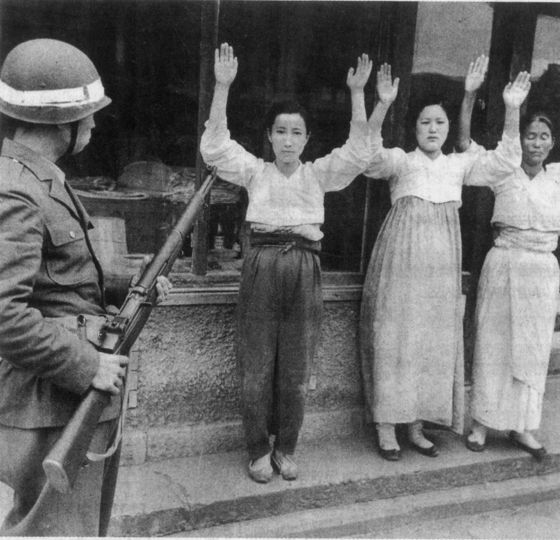 A soldier searches civilains in South Jeolla in a bit to uncover people who took part in the Yeosu-Suncheon Rebellion in 1948. [JOONGANG ILBO]

A movie about the Yeosu-Suncheon Rebellion is in the making and set to be released at the Berlin International Film Festival next February, according to Yeosu city government.

“Dongbaek” will tell the story of the Yeosu-Suncheon Rebellion , a protest in Yeosu and Suncheon of South Jeolla, by some 2,000 soldiers on Oct. 19, 1948, who resisted the Syngman Rhee government’s decision to suppress an antigovernment protest in Jeju Island.

The protest in Yeosu grew into a bloody clash between the Rhee government forces and the protesters who were joined by civilian sympathizers from the surrounding regions.

A government-led fact-finding investigation in 2009 concluded that the Rhee government wrongfully attacked and killed between 438 and 2,000 innocent civilians in the incident.

Haeorum ENT, a film production company, said the plot of the film will center on a man who lost his father during the incident and a woman whose father was one of the perpetrators.

Actors including veteran actor Park Geun-hyung, Shin Bok-sook and Kim Bo-mi will star in the film.

A preview will be held in Korea in September. More details of the film will be shared at a press conference hosted by Haeorum ENT at Yeosu Culture Hall in Yeosu, South Jeolla, on Tuesday.

If there's one thing Suncheon takes seriously, it's temple food