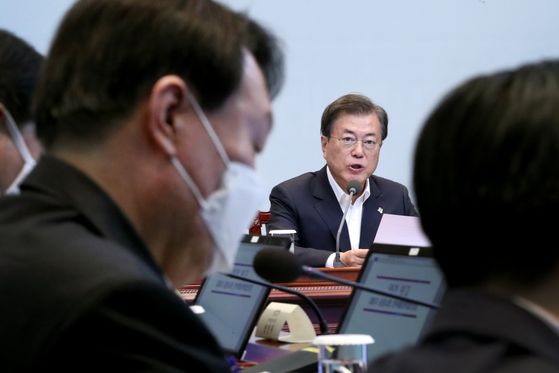 President Moon Jae-in, center, speaks at the anti-corruption policy meeting at the Blue House on Monday. Prosecutor General Yoon Seok-youl, left, was among the participants of the meeting, as well as his rival, Justice Minister Choo Mi-ae. [YONHAP]


President Moon Jae-in on Monday urged his justice minister and the prosecutor general to stop fighting each other and cooperate to complete reform of the prosecution.

“Last week, the Ministry of Justice and the prosecution each launched task-force teams to protect human rights during criminal procedures,” Moon said during his opening remarks at a Blue House policy meeting that included both top officials. “Since the two powerful organs willingly started the initiatives, they must cooperate with each other and prepare a bold reform measure to make the people feel actual changes.”

Prosecutor General Yoon Seok-youl has been facing growing pressures from the ruling party to step down for his constant discord with Justice Minister Choo Mi-ae.


Moon stressed the importance of cooperation as the friction between Yoon and Choo reached a new peak last week amid disagreements over an ongoing investigation into the prosecutors’ handling of a 2010 corruption probe into former Prime Minister Han Myeong-sook.

On May 29, Yoon reassigned the case to the human rights monitoring office of the Seoul Central District Prosecutors’ Office. The investigation is reviewing prosecutors’ suspected coercion of a witness to testify against Han, and was originally assigned to the more independent and powerful Inspection Headquarters of the Supreme Prosecutors’ Office.

Led by Han Dong-soo, a former judge appointed by Choo’s predecessor Cho Kuk, the Inspection Headquarters has the power to request warrants, conduct raids and detain suspects, unlike the human rights monitoring office. Han Dong-soo has also argued that his team should be in charge of the internal probe.

During a National Assembly hearing last week, Choo said Yoon’s assignment was a mistake. She then ordered the Inspection Headquarters to directly question key witnesses instead of waiting for the human rights office’s findings.

Tensions then boiled over, with the ruling Democratic Party (DP) starting a campaign to oust Yoon. Rep. Sul Hoon, a member of the DP’s Supreme Council, said Friday that Yoon must step down for his “hostility” toward the Moon administration.

Moon appointed Yoon as the prosecutor general on July 25, 2019. The two-year tenure is guaranteed by law.

In a concession on the eve of the Blue House meeting with Moon and Choo, Yoon ordered the Inspection Headquarters and the human rights office to share their findings and conduct probes simultaneously. The announcement from the Supreme Prosecutors’ Office came Sunday night.

Although Moon expressed deep confidence in Yoon for his fairness at the time of the appointment, the mood changed quickly. In August, prosecutors went after one of Moon’s key allies, former Justice Minister Cho, and his family for alleged academic and financial fraud. Cho stepped down from the minister post after just 36 days in office in October.

In November, Moon told Yoon that it is his job to create a fair anti-corruption system that will work even if Yoon is not the prosecutor general. The prosecution continued its probe and indicted Cho on 12 different charges, including bribery and graft, in December.

Prosecutors argued that Yoon must remain, as the office is facing massive changes. A new investigation agency tasked with corruption probes into senior public servants is scheduled to open in July, and the prosecution will surrender some of its investigative powers to the police.

“More changes will be introduced as follow-up reform measures, and that will bring about a complete change to the criminal justice system,” said one prosecutor. “If the prosecutor general leaves now, not only the prosecution but the system will be destroyed. He must stay for all, not for himself.”

Another prosecutor agreed: “Inside the prosecution, overwhelming majority said Yoon must stay."

Moon said Monday that Choo and Yoon should also do their best to support the upcoming opening of the new investigation agency and the planned redistribution of investigative powers between the prosecutors and police.

“I also ask for the National Assembly’s support so that the new investigation agency will launch next month as stated in the law,” Moon said.

According to the law governing the new investigation agency, a seven-member nomination panel is supposed to recommend two candidates to head the agency to the president. Moon will select one of the two and make an appointment.

The panel, however, has yet to be formed with the National Assembly in a deadlock. The opposition United Future Party has been boycotting the legislature in response to recent moves by DP to wield its majority at the expense of National Assembly traditions.

Moon sitting on his hands