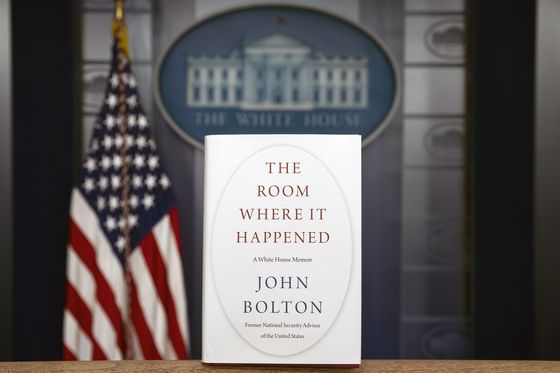 A copy of "The Room Where It Happened" by U.S. President Donald Trump’s former National Security Advisor John Bolton is photographed at the White House last Thursday in Washington ahead of its release Tuesday. [AP/YONHAP]

"The Room Where It Happened," the Bolton memoir set to be published Tuesday, details the three Kim-Trump meetings and the considerable amount of energy expended by Bolton to thwart any U.S. concessions to North Korea.

In a tweet on June 28, 2019, Trump — who was on an official trip to Japan and Korea — offered to shake hands and say hello with North Korean leader Kim, which led to the impromptu meeting days later on June 30 in the inter-Korean truce village of Panmunjom. This marked the first time a sitting U.S. president stepped onto North Korean soil, and took place during Trump’s visit to Seoul for a summit with Moon.

According to Bolton, “Trump wanted Moon nowhere around, but Moon was determined to be present, making it a trilateral meeting if he could.” Bolton had “entertained the faint hope that this dispute with Moon could tank the whole thing, because it was certain Kim didn’t want Moon around.”

Before heading to the DMZ on June 30, Moon and Trump had a bilateral meeting at the Blue House.

Moon suggested that he “greet Kim and then hand him over to Trump and depart,” saying it wouldn’t be right for the South Korean president not to be present when “Kim entered South Korean territory.”

Bolton wrote that he decided to go straight to his next schedule in Ulaanbaatar in Mongolia rather than the DMZ because he was “past caring at that point.” He went on to describe the third Kim-Trump meeting as an “irresistible photo op.”

Bolton, a former U.S. ambassador to the United Nations, served as Trump’s third national security adviser for 17 months from April 2018 through September 2019.

A hard-liner on Pyongyang policy, Bolton makes no secret of his contempt for the denuclearization negotiations with North Korea throughout the book and admits from the get-go he had been “sick at heart over Trump’s zeal to meet with Kim.”

Bolton describes the North-U.S. denuclearization negotiations as being a byproduct of the Moon administration’s reunification agenda rather than being in America's interest.

In the memoir, Bolton recounts that his South Korean counterpart, Chung Eui-yong, director of the Blue House National Security Office, had been behind the North Korean leader’s invitation to talks, which led to the first Trump-Kim summit in June 2018 in Singapore.

In the Oval Office in March 2018, Chung “extended Kim’s invitation to meet to Trump, who accepted on the spur of the moment,” according to Bolton. “Ironically, Chung later all but admitted that it was he who had suggested to Kim that he make the invitation in the first place!”

He added, “This whole diplomatic fandango was South Korea’s creation, relating more to its ‘unification’ agenda than serious strategy on Kim’s part or ours.”

Bolton expresses relief that what he called the “April 27 Moon-Kim festival at the DMZ,” referring to an inter-Korean summit in Panmunjom in 2018, was “actually almost substance-free.”

In the memoir, Bolton writes that a declaration to end the 1950-53 Korean War, which ended with an armistice agreement, also came from the Moon administration.

He wrote, “I originally thought the ‘end-of-war declaration’ was the North’s idea, but I later started to suspect that it was Moon’s, emanating from and supporting his reunification agenda, another good reason not to buy it.” He said it risked “legitimizing” Kim Jong-un and weakening economic sanctions on the North, adding he didn’t want a “legally binding agreement."

Bolton also described later that the North “had told us they didn’t care about it, seeing it as something Moon wanted,” and also “worried about Moon’s pitching Trump on these bad ideas.”

In the first North-U.S. summit on June 12, 2018, in Singapore, Kim and Trump neared an “action for action” agreement, according to Bolton, and when asked by Kim if UN sanctions would be the “next step,” Trump said “was open to it and wanted to think about it.”

Bolton goes on to describe his attempts to thwart Trump from making a bad deal at the Hanoi, Vietnam, summit in late February 2019, keeping him from “making catastrophic concessions and compromises.” At one point during the summit meeting, Bolton called for the need for a “full baseline declaration of North Korea’s nuclear, chemical, biological, and ballistic-missile programs.”

Bolton added, “Kim wasn’t buying, urging that if we went step by step, that would ultimately bring us a comprehensive picture,” while pushing for “legal guarantees to safeguard its security.” Trump eventually walked away from the talks, which Bolton called, “no surprise.”

Bolton indicates that he has often clashed with Stephen Biegun, the U.S. deputy secretary of state and special representative for North Korea, on policy toward Pyongyang. Biegun is known for pushing a more flexible approach to the North. Bolton also expressed disdain for a draft U.S.-North statement for Hanoi spearheaded by Biegun, which ended up getting scrapped.

Bolton has touted the so-called Libyan model of denuclearization. Late Libyan leader Muammar Gaddafi disposed of his country’s weapons of mass destruction as a precondition for sanctions relief in a 2003 agreement. Pyongyang has balked at this model, which it sees as leading to the downfall of Gaddafi, who was killed at the hands of rebels in 2011.

The rocky relations between Seoul and Tokyo were also brought up in Trump’s conversations with Moon in an April 2019 meeting at the White House.

Trump, recounted Bolton, “asked if South Korea could fight together with Japan as allies despite not wanting to conduct exercises with Japan.” Moon was said to have “answered frankly that Tokyo and Seoul could conduct joint military exercises, but that having Japanese forces in Korea would remind people of history,” referring to Japan’s 1910-45 colonial rule over the peninsula.

Trump was said to have pondered in the case of war with North Korea whether South Korea would accept Japanese participation. Moon avoided a clear answer but “conveyed that South Korea and Japan would fight as one, so long as there were no Japanese Self-Defense Forces on South Korean soil,” according to Bolton.

Trump also has threatened to pull U.S. troops from South Korea to pressure Seoul amid negotiations to seal a new bilateral defense cost-sharing agreement. The previous Special Measures Agreement (SMA) on the stationing of U.S. troops in Korea expired at the end of last year.

Bolton wrote that he “feared Trump’s ultimate threat — withdrawing our troops from any country not paying what he deemed to be an adequate amount — was real in South Korea’s case.”

The amount being requested by the Trump administration, “$5 billion annually, an enormous increase over the less than $1 billion per year Seoul was paying,” and the defense cost-sharing negotiations had been “causing enormous concern at both the State Department and the Pentagon,” he wrote.

He added, “They didn’t want to charge host countries as if we were mercenaries, and also because they knew it would be hard to obtain such major increases.”

According to the memoir, Trump told Moon during a bilateral summit in Seoul in June 2019 that the United States “shouldn’t pay real estate taxes for land to protect the South since we didn’t own the land, and perhaps we would leave when things were peaceful.”

Moon explained that South Korea paid 2.4 percent of GDP for its defense budget, the highest level of all U.S. allies, while Trump still insisted he wanted $5 billion.

Trump accused Bolton in tweets last week of telling lies and breaking the law by leaking classified information, and the White House has tried to block the release of the memoir and filed a lawsuit to prevent the book's sale and distribution. Trump has several times blamed Bolton and his push for the Libya model for the deadlock in negotiations with the North.

In another interview with NPR Sunday, Bolton, citing North Korea blowing up the inter-Korean liaison office at Kaesong last week, said “this entire two-year-long effort with North Korea ended in diplomatic failure.” He added that it “allowed the North Koreans the time that they need to continue to pursue nuclear weapons and ballistic missile delivery systems.” 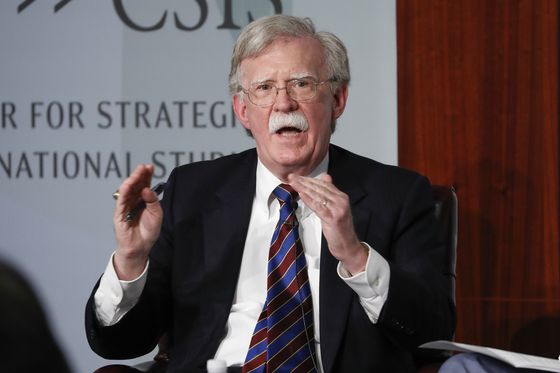 John Bolton, the former U.S. national security adviser, speaks at the Center for Strategic and International Studies in Washington on Sept. 30, 2019. [AP/YONHAP]

Get the facts straight (KOR)