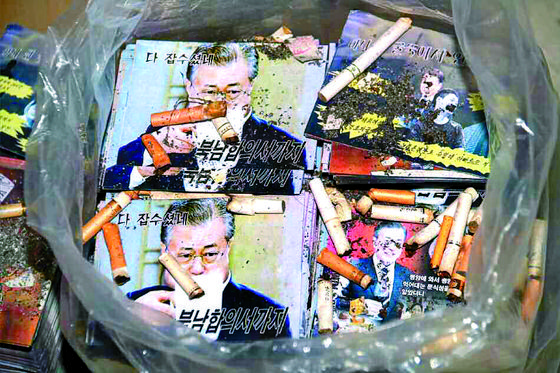 The propaganda leaflets North Korea is threatening to send to South Korea in reaction to those sent by North Korean defectors. [RODONG SHINMUN/NEWS1]


“The excitement for rage and retaliation are elevating over the trash and betrayers who insulted the entire people of Joseon by meddling with our most sacred and highest dignity.”

The article on North Korea’s state mouthpiece Rodong Shinmun on June 20 starts with a sentence lashing out at South Korea. It released four photos with the article, including a leaflet showing President Moon Jae-in’s face with a slogan, “You ate off all, including the inter-Korean agreement.”

It is shocking to see several cigarette butts on the face of Moon. The Rodong Shinmun aimed to make the effect dramatic by juxtaposing President Moon’s photo with a story on the highest dignity. Here, the highest dignity refers to North Korean leader Kim Jong-un.

According to the standard Korean dictionary, “dignity” means highness and nobility that cannot be tarnished. In old times, it was used to refer to the king. Modifiers such as “highest” suggest there is no one else to match Kim, at least in North Korea.

Even considering the unique nature of North Korea society, using the word “dignity” to refer to the leader is unusual. The socialist Constitution of North Korea, which was enacted in 1972 and revised eight times, does not include the term. The word “dignity” appears three times in the Constitution, as in “Kumsusan Palace of the Sun is the symbol of Joseon people’s dignity.” Here, I got a sense that idolization for Kim transcends generations.

The North Korean Constitution is one of the favorite research topics for South Korean jurists. North Korea revised the Constitution last year, and Chapter 1 stipulates that the chairman of the State Affairs Commission represents the nation. It is interpreted as a move to prepare for international meetings with other countries, such as the United States. Chapter 2 on economics clarified economic development strategies, following the undeniable trend of the time. But the wheels of Korean Peninsula history are going in a progressive direction — the opposite of the newly revised Constitution. Highest Dignity Kim would know it better than anyone else.