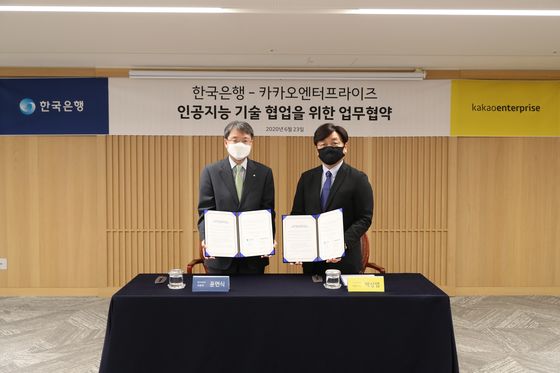 Yoon Myun-shik, the Bank of Korea’s senior deputy governor, left, and Baek Sang-yeop, CEO of Kakao Enterprise pose for a photo after signing an MOU on Tuesday at the bank’s headquarters in Jung District, central Seoul. [BANK OF KOREA]

The Bank of Korea (BOK), which just celebrated its 70th anniversary, is taking on an unexpected partner: Kakao, the startup-turned-IT giant that just turned 10 years old.

The central bank said Tuesday that it has signed a memorandum of understanding with Kakao Enterprise, a subsidiary of tech giant Kakao dedicated to artificial intelligence (AI), to collaborate on developing AI and big data technology.

The partnership is the first step under the recently announced BOK 2030 scheme where the bank pledged to collaborate with external partners to digitize its work flow and improve its research methods.

Under the agreement, the BOK will use AI technology to not only improve its regular operations, but also to support its policy making decisions, such as setting the benchmark rate, as well.

“Supporting policy making decisions is a challenging area that no other AI companies have attempted so far,” the bank said in a release.

“On the back of the central bank’s capacity in research and Kakao Enterprise’s technology, we expect it could come to fruitful achievement.”

The collaboration will start by using AI-based translation system for reports and speech-to-text technology to automatically take minutes of meetings, according to the AI company.

The BOK said it selected Kakao Enterprise as its partner because the IT company has collaborated with not only private firms but also state-run agencies as well, including the Korean Intellectual Property Office and broadcaster KBS.

It is planning to set up a new team dedicated to research big data and AI technology in the latter half of this year in order to cooperate with Kakao Enterprise.