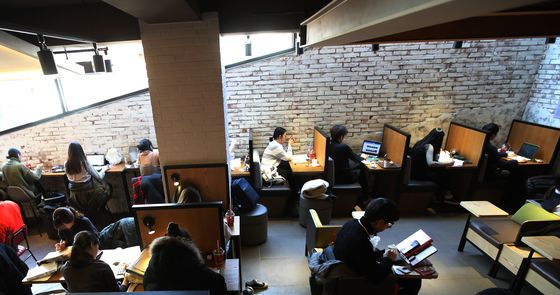 A photo of a coffee shop in Seoul taken in 2017 that serves a single person. [YONHAP]


Last year, the number of people living alone in Korea exceeded 6 million for the first time ever, with a sharp increase noted in the single senior citizen population.


According to Statistics Korea on Tuesday, the number of people living alone amounted to 6.04 million as of October last year. That’s a 4.3 percent increase compared to the same month a year earlier, or 251,000 more.

The number of households overall in the country grew by 1.9 percent.

Those living alone account for nearly 30 percent of all households, up 0.7 percentage points year-on-year to 29.9 percent, an all-time record.

The latest study found that while more men than women that live alone had jobs, accounting for 56.7 percent at 2.08 million compared to their female counterpart at 1.59 million, the increase was sharper for women.

Job increases were particularly fast among the single elderly.

The rate is faster than the overall increase of 2.8 percent.

Single households aged 50 and older with jobs are about 40 percent of the total.

For those in their 20s, the percentage employed dropped 0.3 percentage points.

This may be due to the Moon Jae-in government’s policy of creating temporary jobs for older Koreans.

Single household totals for those with higher education rose the fastest, at 6.2 percent. This increase has helped raise the employment status as well as the average paycheck of people living alone.