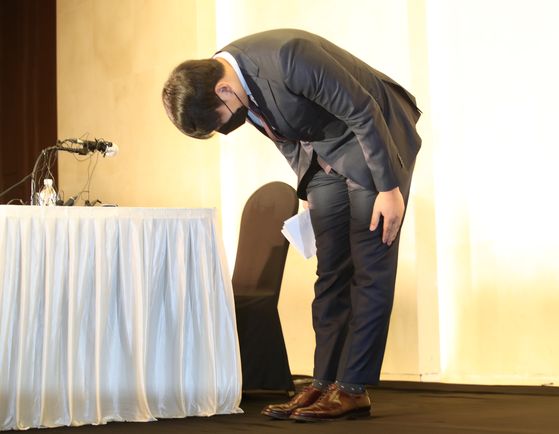 Former major leaguer Kang Jung-ho bows before the start of a press conference at Standford Hotel in Seoul on Tuesday. [YONHAP]

Former major leaguer Kang Jung-ho kicked off his bid to return to the KBO with a press conference on Tuesday where he apologized for the lengthy rap sheet that caused him to lose his U.S. visa and ultimately crash out of the MLB.

Kang, who formerly played for the Pittsburgh Pirates, announced in a press conference at the Stanford Hotel in Mapo District, western Seoul, that he is hoping to return to the KBO. But his reputation is likely to be an issue — Kang has been booked three times for driving while drunk, in 2005, 2011 and 2016, when he also fled the scene of the crime. Kang was also accused of sexual assault in 2016, although no charges were ever brought against him.

“I truly apologize for my actions, but I know that no words aren't good enough to bring forgiveness,” Kang said Tuesday. “I was charged for drinking and driving in 2005 and 2011. Making matters worse, I hit a guard rail in 2016 and left the scene without fixing the problem. It was a very bad action and was something I shouldn’t have done. I have no excuse for my actions.”

Kang was one of the few Korean batters to make it to the big leagues, and his rookie season showed a lot of promise. That didn't last long, however, as he was charged with fleeing the scene of an accident after driving under the influence in Seoul in 2016. Kang received an eight-month jail term, suspended for two years in March 2017, right when he should have been returning to Pittsburgh for his second season.

“To everyone who’s seen my actions and for the young fans of baseball, I sincerely apologize,” Kang said. “I’ve disappointed everyone with my actions and my apology was made a little too late. Throughout my career, I’ve made multiple mistakes that I can’t fix. Back when I was little, I didn’t know anything and just thought that I only needed to be good at baseball.”


Although he avoided prison time, Kang was unable to play for the Pirates in 2017 because the United States refused to give him a visa. That winter, he attempted to play in the Dominican Republic, but didn't find much success. The next year he returned to the Pirates, but the damage was already done. Park was demoted to the minors and eventually dropped from the franchise.


Although Kang claims he's been sober for four years, he was last arrested for drunk driving three and a half years ago.

When Kang announced his plan to return to the KBO, the league immediately slapped him with a one-year ban and 300 hours of community service. The move has been criticized, as other players charged with drunk driving have been forced to retire. Kang's rap sheet is significantly longer than former SK Wyverns infielder Kang Seung-ho, who was forced to retire after driving drunk last year.

“I am willing to give up everything,” Kang Jung-ho said. “I am ready to take all the criticism toward me and live my life as a new person.”

Whether Kang will be able to return once his one-year ban is over next year is ultimately up to the Kiwoom Heroes. Since Kang left for the majors through the posting system, Kang is still on the Heroes’ voluntarily retired list, meaning the Seoul club has to sign Kang for him to return to the KBO.

“I don’t know what’s going to happen from now on,” Kang said. “But if [the Heroes] accept me, I’m going to donate and get involved in DUI [driving under the influence] campaigns. And until the day I retire, during the offseason, I will share my talent. Even off the field, I’ll continue to do community service.”

Re-signing Kang is likely to be a tough choice for the Heroes. The club has faced its fair share of criticism for the conduct of its players before — in 2018, two players were accused of sexual assault while on the road with the team, although ultimately not indicted, and just last week the team announced the signing of Addison Russell, a former MLB All-Star once suspended for domestic abuse.


Kang claims that he has made the decision to return to the KBO because he wants to help younger players.

“By returning to the KBO, I want to show that I’ve really changed, and from now on, I want to teach a lot of things to the young players and be a big help," Kang said. I think that’s why I [decided to] return. As I feel really sorry for the young [fans and players,] I’ll try my best to be a help to them.”

While his personal conduct has undermined his career, on the field Kang has been a powerhouse for more than a decade. Having made his debut with the now-defunct Hyundai Unicorns in 2006, Kang really started to stand out in 2008, when the Unicorns disbanded and the club was re-established as the Heroes.