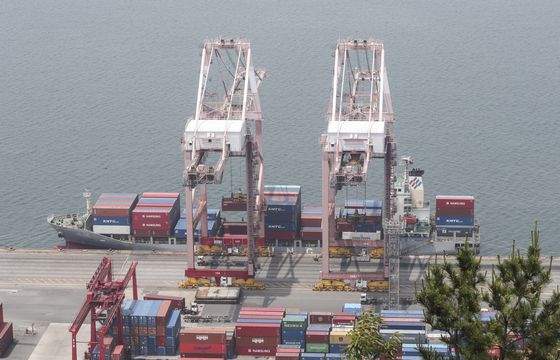 Cargo loading cranes at a port in Busan on June 1. The IMF lowered Korea's economic growth forecast due to the coronavirus crisis and its effect on world trade. [YONHAP]


The IMF lowered not only Korea’s economic growth prospects for this year but also those of the United States as the impact of the coronavirus on the global economy shows little signs of waning.


The Korean government stressed that the projection for Korea’s growth was higher than developed economies including U.S. as well as the average for emerging markets.

The latest report by the IMF released on Wednesday predicted the Korean economy will shrink 2.1 percent this year. This is a 0.9 percentage-points decline from a projection made in April that forecast Korea’s negative growth at 1.2 percent.

If the Korean economy drops 2.1 percent, it will be the first negative growth since the economy tumbled 5.1 percent during the Asian economic crisis in 1998.

The IMF's forecast for next year’s growth was also revised to 3 percent, 0.4 percentage points lower than the projection made two months ago.

Its projection for global economic growth for this year was also revised.

This year, the global economy is expected to shrink 4.9 percent, the IMF said, and next year it will increase 5.4 percent.

This year's projection is a 1.9 percentage-point decline from the previous estimate of negative 3 percent growth. Next year’s projection was revised down only 0.4 percentage points.

The IMF noted that aside from several countries including China, Germany and Japan, most reported economic growth was worse than expected in the first quarter.

Global trade is expected to decline 11 percent this year, it said.

However, if there’s a second wave of the coronavirus pandemic in early 2021, the global economy next year could end up growing only 0.5 percent.

Although President Moon Jae-in recently emphasized that the coronavirus situation in Korea is under control, there are growing concerns of daily new cases rising to around 50 in recent days.

In other countries including the United States and China, there are concerns about a resurgence of the virus.

The IMF projected that advanced economies will likely decline 8 percent this year, 1.9 percentage points lower than its projection in April, citing “synchronized deep downturns” due to the coronavirus and a slow recovery in the second half.

The growth projection for developing countries was lowered 2 percentage points. They are expected to fall 3 percent.

Among the advanced economies, the United States is expected to decline 8 percent, faster than the 5.9 percent fall that the IMF projected in April.

Europe is expected to decline 10.2 percent, faster than its earlier 7.45 percent forecast.

The Korean government is targeting 0.1 percent growth, which many consider too optimistic.

The Korean government has created 23.9 trillion won ($19.8 billion) supplementary budgets previously this year. The third, which is waiting for legislative approval, is 35.3 trillion won, an all-time record.