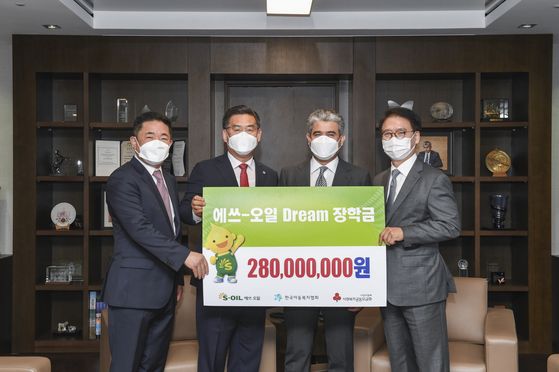 
S-Oil, a leading oil refiner, donated 280 million won ($232,738) in scholarships to help teenagers from orphanages pursue their studies on Wednesday.

The scholarships will benefit a total of 114 students, either college students majoring in engineering or high school students.

“S-Oil provided 2.5 million won in scholarships to each of the 44 two-year college students majoring in chemical, mechanical, electric and electronic engineering... The refiner also donated 2.0 million won in technical training expenses to 70 high school students working hard to gain technical skills or licenses in heavy equipment, computers, hairdressing and baking,” the refiner said in a statement.

A part of the scholarship is devoted to a choir group from an orphanage named Sundukwon in Jongno District, central Seoul.


S-Oil launched the scholarship program back in 2016 and has so far given a total of 1.48 billion won to 600 students.

The company held a ceremonial event at its headquarters in Mapo District, western Seoul, on Wednesday with the Korea Child Welfare Association.   Scholarship recipients didn’t attend the event due to concerns surrounding the coronavirus pandemic.

“Education is the platform on which students can unlock their potential, capture opportunities and turn their dreams into reality,” said S-Oil CEO Hussain Al-Qahtani.

“S-OIL will keep cheering the students to arm themselves with knowledge and skills to get closer to their dreams,” Al-Qahtani said in a statement.