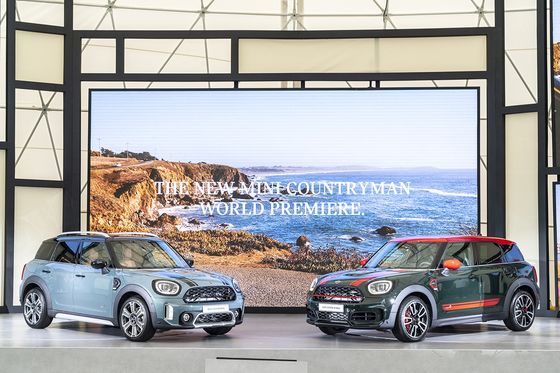 MINI held the world premiere for the face-lifted Countryman SUV in Korea on Wednesday. [BMW KOREA]

YONGIN, Gyeonggi — In a transparent dome-shaped pavilion temporarily pitched on an unassuming campsite in Yongin, Gyeonggi, on Wednesday, MINI introduced the updated version of its Countryman crossover SUV to the world for the first time.

MINI introduced a partially revamped, or face-lifted, version of its second-generation Countryman SUV — the first time the MINI brand, well-known for its quirky designs and go-kart driving experience, has held a world premier in Korea since it started its business here 15 years ago.

The move was a continuation of an effort by BMW, MINI's parent company, to show its dedication to Korea, which is rapidly becoming a major market for the German luxury automaker.

Just last month, its bigger affiliate BMW held world premiers for new models of the 5 Series and 6 Series in Korea, also a first not only for the brand, but also among all imported carmakers selling cars in Korea.

“Korea is a country deeply rooted in tradition yet open for modernism and suits perfectly with our 60-year-old brand, MINI,” said Bernd Korber, head of MINI, through a recorded video.

“People are vibrant and active and are in my opinion a perfect match for our biggest and most versatile model, the new MINI Countryman.”

The Countryman, which was first introduced in 2011, is the only model within the MINI lineup that comes with four doors. It accounts for 30 percent of sales at MINI, according to the brand. 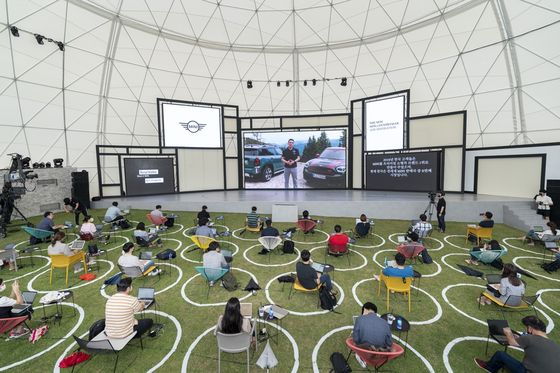 Bernd Korber, head of MINI, speaks through a screen at the world premiere of the new MINI Countryman in Yongin, Gyeonggi on Wednesday. The event was held at a campsite and followed Korea’s social distancing policies, with reporters sitting apart from each other amid the outbreak of the coronavirus. [BMW KOREA]

BMW Korea said it chose to hold the launch on a campsite to reflect the features of the Countryman SUV, which is agile enough to drive on a daily basis but also solid enough for trips outside of the city to enjoy nature and even off road tracks, with its optional ALL4 all-wheel drive system.

The Countryman is available with seven different engines, three of which will be petrol and three diesel. The last variety is a plug-in hybrid vehicle. The Countryman is the first model within the MINI lineup to come with the eco-friendly engine option, according to the brand.

The hybrid version, which will come to Korea next year at the earliest, will have a maximum 220 horsepower and will be able to drive 61 kilometers (38 miles) on electric mode.

The other two engine types will start sales here in the fourth quarter.

The internal combustion engine versions’ maximum horsepower will vary from 102 to 190 depending on the type.

MINI has been showing solid growth since it first came to Korea in 2005.