Korean quarantine officials will now board all Russian vessels before they dock in Busan to check for possible signs of the coronavirus, and press legal charges against ships that lie about their crew members’ symptoms.

Korean health authorities announced the new guidelines for the nation’s second-largest city Wednesday, two days after 16 Covid-19 cases were traced to a Russian vessel from Vladivostok that docked at Gamcheon Port in Busan last Sunday morning with 21 crew members on board.

The captain of the 3,933-ton Ice Stream, which carried frozen seafood, has been accused of lying about his sailors’ symptoms to Korean quarantine officials on Saturday as the ship was about to dock at the port, claiming no one was ill.

Busan quarantine officials allowed the Russian vessel to dock, and more than 100 longshoremen at the port subsequently came into contact with the infected patients through Monday morning. None have tested positive so far, health officials said.

Prior to Wednesday, Busan quarantine officials would board foreign vessels to check for signs of the virus only if the ships were from China, Hong Kong, Macau, Italy or Iran — areas that Korea defines as Covid-19 danger zones — or if the ship’s crew planned to disembark onto Korean soil. Ships were also examined if any of the sailors reported symptoms of the coronavirus.

None of those criteria appear to have applied to Ice Stream.

On Tuesday afternoon, a crew member on another Russian ship that was docked near Ice Stream also tested positive, bringing the area's total to 17 cases — all Russians. They have been transferred to nearby hospitals for medical treatment.

No other person on the 3,246-ton Ice Crystal ship has tested positive for the virus so far.

Ice Stream and Ice Crystal are operated by the same Russian shipping company.

Korean Vice Health Minister Kim Gang-lip said Wednesday in a press briefing that foreign vessels that fail to honestly report their crew’s Covid-19 symptoms to Korean quarantine officials prior to docking at a Busan port will be fined up to 5 million won ($4,200).

In the event any infected foreign sailor transmits the virus to another person in Korea after docking, Kim warned the government would press indemnity charges against their shipping company for reimbursement of all “social costs” incurred. 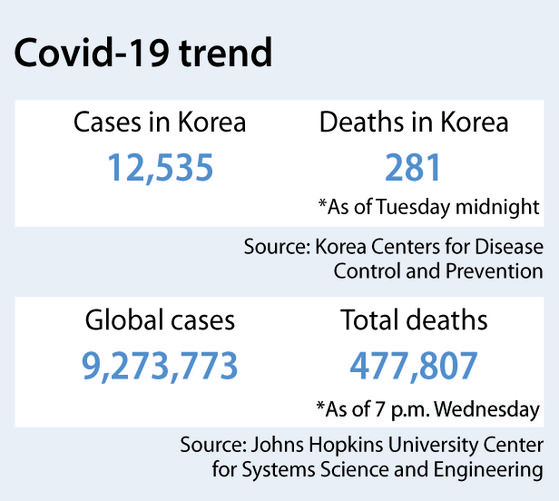 The revised guidelines came as the Korea Centers for Disease Control and Prevention (KCDC) reported 51 new Covid-19 cases across the country Tuesday, up from 46 the day before. Twenty were imported cases: four from each Iraq, India and Pakistan; three from Kazakhstan; one from each Kuwait, Russia and China; one from a country in the Americas; and one from an African country.

Thirty-one people were found to have been domestically infected. Eleven were in Seoul, eight in Daejeon, five in Gyeonggi, three in Incheon, two in Ulsan and one each in Gangwon and South Chungcheong.

Korea’s total case load now stands at 12,535. By Tuesday at midnight, 281 people had died, the same as the previous day, while 10,930 people had been declared fully recovered, up by 51 from the day before.

Among the latest local infections, most were linked to growing clusters from the Seoul metropolitan area and Daejeon.

In Icheon, Gyeonggi, a 50-year-old contract worker at a distribution center of the Korean e-commerce company Coupang came down with the coronavirus Wednesday — the third Coupang distribution center to be hit by the virus. The center shut down at 11 a.m. Wednesday and testing has been ongoing since.

More than 150 total infections have been traced to Coupang’s distribution center in Bucheon, Gyeonggi, and one in Goyang, Gyeonggi.