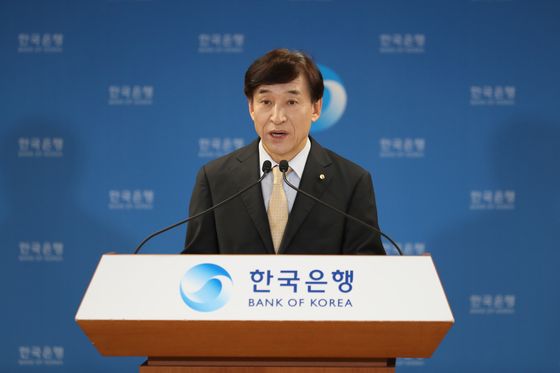 
The central bank expects flat inflation this year due to the effect of the coronavirus pandemic.

The Bank of Korea (BOK) on Thursday projected this year’s inflation at 0.3 percent and next year's at 1.1 percent.

This is lower than last year’s 0.4 percent and far lower than the BOK’s target of 2 percent for this year.

“Consumer price growth, which was in the mid-1 percent range in January, quickly slowed since February to reach 0.1 percent in April and negative 0.3 percent in May, sharply lower than this year’s target of 2 percent,” said BOK Gov. Lee Ju-yeol. “This is largely because of the unprecedented impact of Covid-19 on the global economy, which applied downward pressure on consumer prices.”

Lee noted that international crude prices have fallen sharply as the coronavirus froze economic activities and that social distancing has had an effect on the travel, lodging and restaurant businesses.

“There's concern of a second wave of Covid-19,” Lee said. “As such, consumer price growth will likely be around 0 percent.”

He added that while the economy will gradually improve next year, raising inflation, arriving at the 2-percent target will take time.

However, Lee said the central bank will not change its forecast of a negative 0.2 percent rate for this year’s economic growth, which it announced in May.

Lee said there were no reasons to change its forecast.

“While the global economic forecast [by the International Monetary Fund] seems reasonable, the impact on Korea seemed to have been slightly overstated,” Lee said.

On Wednesday the International Monetary Fund lowered its economic growth outlook for Korea from negative 1.2 percent to negative 2.1 percent.

Its growth projection for the global economy was changed from negative 3 percent to negative 4.9 percent.

While many institutions including the Organization for Economic Cooperation and Development (OECD) project negative growth for Korea, HSBC predicted the Korean economy will grow 0.3 percent this year, which is even higher than the government’s forecast of 0.1 percent.

The bank projected the Korean economy will expand 2.9 percent in 2021.

“Asia will likely lead the global economic recovery over the coming months,” said Frederic Neumann, co-head of HSBC Asian Economic Research. “When it comes to the Korean economy, it has been remarkably resilient and is likely to deliver positive growth in 2020 and 2021.”

HSBC had a similar forecast for the global economy, expecting it to decline 4.8 percent this year while rebounding to 5.8 percent growth next year.